Robert and Irma Merrill were married on July 31, 1946. Though it’s been 70 years since then, Irma says she wouldn’t change a thing.

Robert and Irma Merrill were married on July 31, 1946. It was a Wednesday, and they were due to leave for their honeymoon the next day, a trip up through the lakes that they’d been gifted. They were both 21 years old and madly in love.

Though it’s been 70 years since then, Irma says she wouldn’t change a thing.

“We’ve had many good years together,” Irma said. “It was always good.”

In 1941 Toronto, Ontario was a completely different place. The Star Weekly was 10 cents, the first TV ad had just made its début, the CN tower had yet to be conceived, and Canada had just decided to enter WWII. It is against this backdrop that Bob and Irma first met.

“One day my girl-friend and I had to go down and see a friend’s mother about something,” Irma said. Irma was 16 at the time. As they were walking, the two girls passed Bob and one of his friends, who were busy washing cars. The four began talking, and by the end of the day they were scheduled for a double date. Irma with Bob’s friend, and Bob with Irma’s friend.

“We went roller skating, and by the time we got home again we’d switched partners,” Irma said with a laugh.

Their relationship took off, but before they could get married Bob was pulled into WWII where he served in the Canadian Air Force. He did most of his training in Quebec, and was scheduled to go overseas, making it nearly impossible for him and Irma to see each other. 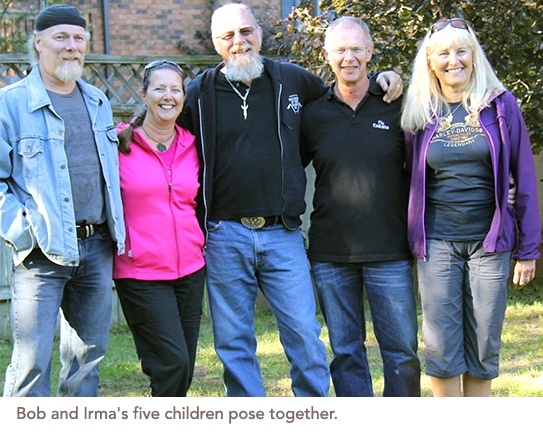 Irma often worried, and shared that once when Bob was scheduled to go overseas his plane was destroyed by ants. At the time, many planes were made of plywood.

Irma wrote to Bob regularly, and looked forward to the letters he wrote back, which let her know where he was and how he was doing.

Not even a year after the end of WWII, Bob and Irma were wed.

Bob worked a variety of jobs. In 1963 they moved from Toronto to Bracebridge. Irma mainly stayed home and looked after their five children: Scott, Kim, Jim, Greg and Lee. Later, Bob drove a tour bus, and Irma would often travel with him.

“They were just extremely devoted to each other, and they really figured out how to make their marriage work,” said Lee Coles, one of the Merrill’s five children.

Bob and Irma enjoyed playing golf and curling together. Irma believes that trust, love and spending time together is what made their marriage so successful. 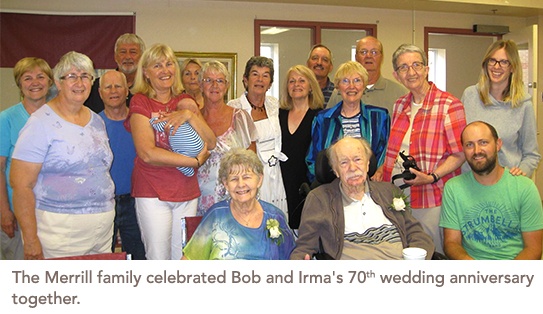 Today, the Merrills’ family has grown to include 12 grandchildren and 10 great-grandchildren, plus extended family.  Bob and Irma are both 91 and living in Muskoka Shores Care Community in Gravenhurst, where they celebrated their 70th wedding anniversary with friends and family.

“We’re in the same place, which is good, so I can still see him,” Irma said. “We’ve had many good years together.”

When asked if she had any advice for young couples, Irma said there was no secret.

“I don’t think I have a recipe, honestly,” Irma said with a laugh. “We just loved each other.”

Next Post
Avast me hearties! Can ye find me hidden treasure?

“The love in this building has no comparison,” Denise Kavin said about Cheltenham CareCommunity, where she lives. Denise has lived on 3 continents, and extends her compassion to everyoneshe meets.
In: Inspirational Life
END_OF_DOCUMENT_TOKEN_TO_BE_REPLACED

A brain-tumour survivor, Michelle’s outstanding spirit has made her a valuable part of the teamat Fairwinds Lodge.
In: Stories from our Team
END_OF_DOCUMENT_TOKEN_TO_BE_REPLACED

Residents and team members celebrated the new year with sparkling drinks, noise makers, andlaughter! Look inside to see some of our favourite pictures of the events.
In: Innovative Programs
END_OF_DOCUMENT_TOKEN_TO_BE_REPLACED