Lance Corporal Winifred Watson set sail from Jamaica with 23 other women for the shores of Britain and WWII. Her story is a must read.

A Jamaican woman serving in the British Army 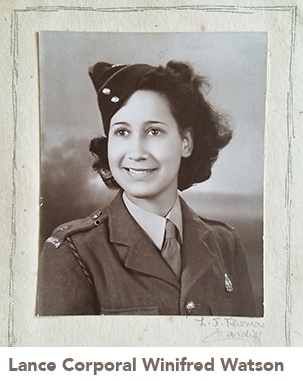 In 1943, at the age of 18, Winifred Watson replied to a notice in Jamaica’s Daily Gleaner newspaper inviting Jamaican women to join the Auxiliary Territorial Service in the U.K.  Joining 23 other female recruits, she boarded the S.S. Rimutaka in Kingston, Jamaica, and they sailed off to England, along with servicemen from New Zealand, and British airmen returning from Far East duty.

At their stop in the Port of New York, one of the officers on board tried to divide the 24 women by their skin colour at mealtime, but they insisted (successfully) on staying together. As Jamaicans, they had been unaware of the colour restrictions which applied in U.S. territory.

After several weeks of zigzagging across the Atlantic in a convoy of over 20 ships, while dodging German U-Boats (enemy submarines) all along the way, they arrived near Bristol, then a stop in London, where the Germans were bombing the city throughout the night. Then they were taken for military training; where they trained for air raid duty, learned to identify dangerous gases by being exposed to them, and marched for miles every day until they were exhausted and their feet were sore.

In December 1943, they were sent to No. 7 Camp, Graven Hill, Bicester, Oxfordshire.  Winifred’s job was to keep track of the inventory of guns and their components. She was promoted to Lance Corporal and Confidential Secretary of the Commanding Officer, transmitting sensitive communications in the secret Overlord code. There, she met her future husband at one of the camp’s Saturday night dances, which was the only respite from the long days and short nights. They were eventually married in February,1945, in a simple, wartime ceremony.

Circa 1945, Winifred was assigned to an anti-aircraft camp (“Ack Ack”) in Romsey, where she was the only woman in the office. On her arrival, two soldiers swung her over a barbed wire fence and she landed in a field. She brushed off the dirt, climbed back through the barbed wire and went back to work at her desk. There were no further incidents, and they were all able to work well together after that.

In October 1945, she boarded the RMS Queen Elizabeth troopship to return to Jamaica via Halifax, Nova Scotia, with 14 women and over 10,000 Canadian soldiers returning home. She flew back to Jamaica from Montreal on a Royal Air Force plane in November, 1945, and was officially discharged from the army as of December 31, 1945.

When the political climate in Jamaica became unfavourable in the 1970s, Winifred, who was working as a chartered secretary at the time, decided to immigrate to Canada. She chose to settle in Toronto in 1979, where her brother, sister and their families were currently living. She worked for many years as a legal secretary in downtown Toronto, retiring in 1992. She remarried in 1998, and was widowed in 2010.

Winifred often said that life in the Auxiliary Territorial Service was a great learning experience that taught her how to associate with people from all walks of life, the value of discipline and co-operation, especially in times of disaster, and to at all times maintain a high standard. “It was a great life – if one did not weaken.”

Today, Winifred is 93 years old and lives at Silverthorn Care Community in Mississauga, ON.

Each month, we’re pausing to recognize some of the outstanding team members who work with us. Thank you for the work you do each day. You are all truly heroes.
In: Stories from our Team
END_OF_DOCUMENT_TOKEN_TO_BE_REPLACED

Residents and team members at Rosewood Retirement Residence in Kingston, ON enjoyed a sushi demonstration by Brandon Gray, a PSW student who learned to make sushi while traveling with a professional chef in Japan.
In: Stories from our Team
END_OF_DOCUMENT_TOKEN_TO_BE_REPLACED