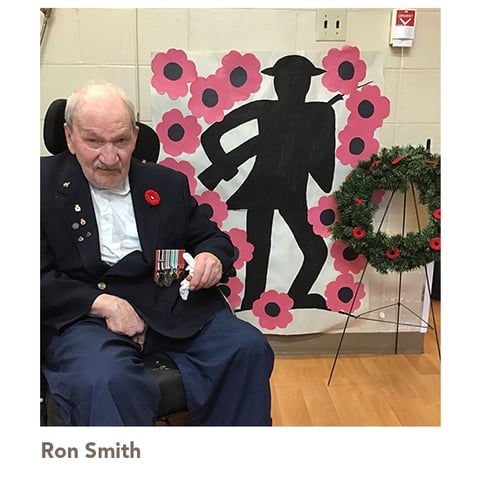 During his time in the military, Corporal Ron Smith knew every army song.

Ron served primarily in the kitchens as a cook. He also worked in the transportation sector. He enjoyed his time in service, and stayed with the military for 25 years.

Ron spent most of his time in the military in Canada; however, he did spend a year on a peacekeeping mission in Palestine and the Middle East. He enjoyed the experience.

While in service, Ron met his wife. She was a server at a local restaurant in Barrie, ON. The couple were happily married for 47 years. After he retired from the military, Ron became a custodian for the school board in Barrie. He continued to love singing and was part of a tri band in Orillia for several years.

Today, Ron continues to sing and enjoy life at Owen Hill Care Community in Barrie, ON.

Each month, we’re pausing to recognize some of the outstanding team members who work with us. Thank you for the work you do each day. You are all truly heroes.
In: Stories from our Team
END_OF_DOCUMENT_TOKEN_TO_BE_REPLACED

Residents and team members at Rosewood Retirement Residence in Kingston, ON enjoyed a sushi demonstration by Brandon Gray, a PSW student who learned to make sushi while traveling with a professional chef in Japan.
In: Stories from our Team
END_OF_DOCUMENT_TOKEN_TO_BE_REPLACED