Frank, 88, spent 30 years with the fire service in North Vancouver, retiring in 1985 as an assistant fire chief.

Appreciation goes both ways at 911 events for former fire chief 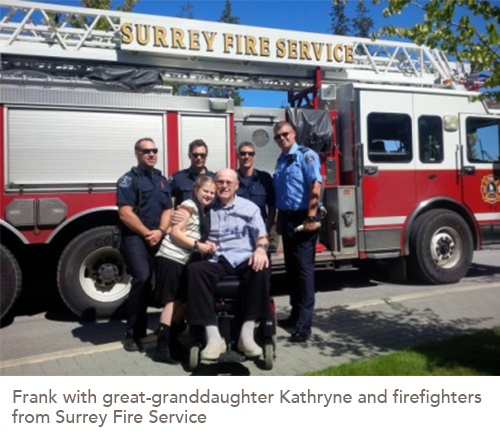 When it comes to attending 911 appreciation events, no one is holding Frank Carberry’s feet to the fire.

Frank, 88, spent 30 years with the fire service in North Vancouver, retiring in 1985 as an assistant fire chief. He’s now a resident at Pacifica Retirement Residence, and a regular at their annual 911 appreciation events.

Active firefighters from Surrey Fire Service brought their truck and swapped stories with Frank and another resident and former firefighter, Bob Longshaw. As soon as they discovered Frank’s illustrious service record, they referred to him as “Chief” for the rest of the day—much to his delight.

“Fire trucks have changed a lot since my time; especially the equipment,” says Frank, who in his late twenties was working as a garage mechanic where a fire chief brought his car in for service.

“One day he asked me if I would be interested in joining the fire service as a mechanic,” said Frank. “I thought about it, asked my wife, and joined up on June 2, 1955.” 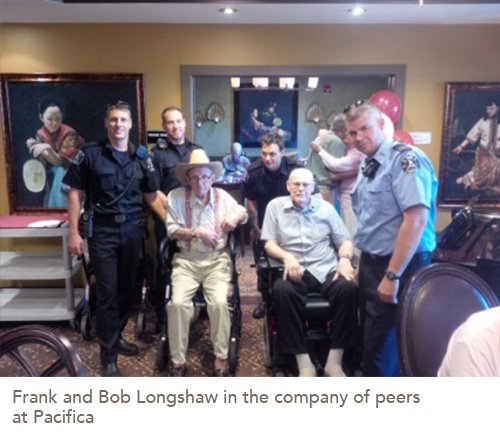 Over the next three decades, Frank worked his way up through the ranks—from lieutenant to captain, and eventually to assistant fire chief. He was on call the night of the Second Narrows Bridge collapse in North Vancouver in 1958, when eighteen steel workers lost their lives. He remembers that night in vivid detail, some 57 years later. The bridge was subsequently rebuilt and renamed the “Ironworkers Memorial Bridge” in 1994 to honour those who died in the collapse.

Following his retirement from the fire service, Frank worked briefly as a snow equipment mechanic at a ski resort on Mount Seymour, North Vancouver. He has been living at Pacifica Retirement Residence since March 2011.

Looking for ideas to celebrate Mother’s Day at a distance? We’ve compiled a few ideas to help ensure this Mother’s Day is special.
In: British Columbia
END_OF_DOCUMENT_TOKEN_TO_BE_REPLACED

Each month, we take a moment to recognize some of the outstanding team members who work with us. Thank you all for the work you do each day.
In: Stories from our Team
END_OF_DOCUMENT_TOKEN_TO_BE_REPLACED