“I feel like I’ve just won the Oscar!” said Pat, winner of the 2020 BC Seniors Living Association’s L.E.A.P. Award.

Awarded for a kind heart 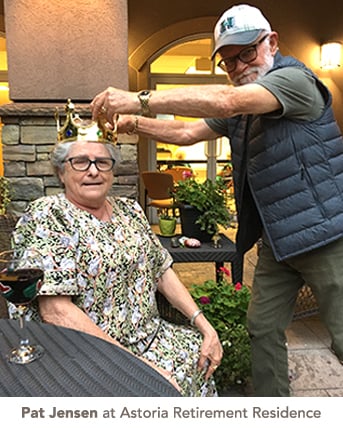 Winner of the 2020 BC Seniors Living Association’s L.E.A.P. Award, 79-year-old Patricia (Pat) Jensen is known for her kind nature and generosity. The L.E.A.P. Award (Let’s Embrace Aging Passionately) is given to a senior citizen who made important contributions to the community, inspired other residents in overcoming challenges, championed social causes, promoted community involvement, and made a valuable contribution to the quality of life of residents. All criteria that apply to Pat.

“If you were to poll her community, I’m sure half would say that Pat is their best friend, because that’s how loving she is,” said a team member at Astoria Retirement Residence in Port Coquitlam. “She gives as much of herself to everyone as she can, and she asks for nothing in return. As this is just her way, she sees nothing outstanding in how she cares for her community, which perhaps makes it even more special. She doesn’t volunteer and fundraise and help for the recognition. She does it purely because it brings her joy.”

After winning the award, Pat said “I feel like I’ve just won the Oscar!”

Born in Winnipeg, Manitoba in April 1941, Pat married the love of her life, Alva Jensen, in May 1959. When Al’s career took them out west in 1964, they packed up their two children, Sherri-Lyn and Ken, and settled in Coquitlam.

A stellar salesman who was often away, Al relied on Pat to keep their lives rolling. She was the queen of their social circle, and they soon became famous for their basement parties, which the whole neighbourhood was invited to and enjoyed. While helping with the family business, Pat jumped in to aid with all aspects of running the warehouse that held everything Al sold. But more important to her than running the warehouse, was taking care of their employees. If you ever found yourself alone over the holidays, Pat would insist you join her and her ever-growing family for dinner. She loved her employees as if they were family, and calls many former employees lifelong friends despite being retired for nearly two decades.

Although Pat wasn’t always the outgoing, commanding presence she is now, as soon as she grew into her own there was no silencing her. In her younger days, she used to dress up as Mrs. Claus to bring chocolates to the bank tellers — a tradition that has shifted into her monthly chocolate deliveries at Astoria Retirement Residence to celebrate birthdays and anniversaries.

While helping her daughter Sherri run her retail store Snuggable Huggables, Pat searched high and low for a larger-than-life pumpkin costume to wear in the hopes of making the children who do their trick-or-treating at the mall smile.

Pat has always loved to be needed, and she’s always the first to offer to lend a hand, often before the recipient even knows to ask. She once spent a month waiting for her granddaughter’s boxes to arrive in Halifax from a cross-country move while her granddaughter was overseas. She has made it a point to visit as many friends in the hospital as she is able, frequently bringing them food or flowers to cheer them up and remind them that they are loved.

She dubbed herself the unofficial Welcome Wagon at Astoria, and will take any new resident by the elbow to show them around and make sure they get acclimated to their new home. Pat’s family has been delighted to hear from many families of Astoria residents, both past and present, who said it was remarkable how Pat was just always their for their loved one, and how comforting it was for them to have Pat by their side.

On top of helping out her fellow neighbour, Pat also goes out of her way to give back to the larger community. Since moving into Astoria in 2015, she has volunteered for every fundraising effort. She recruits other participants and raises donations.

Although not a cyclist, Pat is always on the team and a lead fundraiser for the Heart and Stroke Foundation’s Big Bike for Heart. She raises money and participates in the Terry Fox Run, even though it’s a physical challenge for her. She loves to decorate the bus for the May Day Parade, and you’ll always see her cheering as Astoria’s float moves down Shaughnessy Street.

Pat brought her incredible Christmas Village to Astoria when she moved in. Knowing that others at the residents enjoy the wondrous display, she proudly sets it up each year and uses it as an opportunity to fundraise for Seniors Helping Seniors, a charity raising funds for seniors in need in the local community. She also takes part in the annual Santa visit to the hospitals, and spearheads a resident-run initiative to thank Astoria team members during the holiday season.

Pat’s community building activities don’t just revolve around important holidays however. The Welcome Wagon is also the life of the party and started Happy Hour at the Astoria for all residents to join together for a pre-dinner drink or two as they unwind and share stories from their day. A natural extension of her famous Happy Hour, Pat solicited the assistance of her niece Lyn to run karaoke nights.

When telling one of her granddaughters the reason why she thinks she won this prestigious honour, her answer was simply “because I welcome people in. I sit with them; I talk to them.”

A resident and team member at Astoria Retirement Residence teamed up to publish a children’s book filled with wacky wordplay.
In: Innovative Programs
END_OF_DOCUMENT_TOKEN_TO_BE_REPLACED

Today, Don Simpson turns 107. Despite his age, he’s been seen riding the Big Bike for Heart, and is always the first one to join in on a good time.
In: Centenarians
END_OF_DOCUMENT_TOKEN_TO_BE_REPLACED

A Master Warrant Officer in the Royal Canadian Air Force, Eugene’s true passion is for music.
In: Inspirational Life
END_OF_DOCUMENT_TOKEN_TO_BE_REPLACED