Sneih Charan has led anything but an ordinary life. She’s travelled the globe, found love at first sight, and paved her own way through the world.

Breaking the mould: The tale of a world-travelling woman in the 1950s 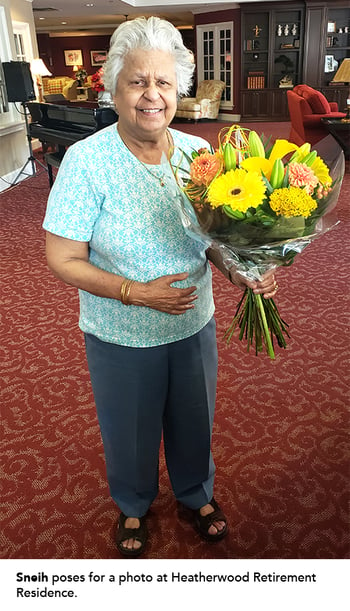 Sneih believes that no matter your age, there is always something more to learn and discover.

Born in 1932, in what was then India, but is now Pakistan, Sneih Charan was sent to boarding school at a young age. She grew up surrounded by different cultures, and even then she found them fascinating.

“I enjoyed meeting people, no matter their culture or what language they spoke,” Sneih said. “My parents were in the Indian Army, so we had lots of contact with the British and Americans.”

Her father was a colonel and brain surgeon in the Indian Army. In 1947, he and Sneih’s mother were in Quetta, Baluchistan, a neighboring country of today’s Afghanistan, when India became independent.

During that year, the region Sneih had been born in suffered a period of unrest as racial tensions built. Sneih’s grandparents were forced to flee their house at night, with barely any belongings. Thankfully, Sneih’s uncle was working with a small airline. He was able to get them to the relative safety of New Delhi, India. At the time, Sneih said that New Delhi was on fire.

“People were paying thousands of rupees to try to get out,” Sneih said. “My grandparents just literally walked out of their house with nothing.”

Sneih and her sister were both safe from the conflict. They were attending a boarding school in Mussoorie, a 5000ft high hill station in India, that was built in the 1800s by American missionaries.

Many of Sneih’s classmates, though they were born in India, were from other cultures.

After boarding school, Sneih went to college in Lucknow, India. She studied general arts, including psychology, history, and English.

“At that time Indian women were not really going out to work, because the culture involves arranged marriages and starting a family,” Sneih said. “But because my parents were in the army, they had a lot of contact with the Western way of life, and they did not want to arrange marriages for their daughters.”

Her first real job was working at a special arts office, run by an American economist, funded by Nelson Rockefeller. The goal of the organization was to find modern Indian artists who could be spotlighted at an exhibition in New York, US. She ran the office and got to meet a lot of up-and-coming Indian artists. While there, she got interested in Indian theatre and joined a theatre group.

She became part of the Indian arts scene, her strong knowledge of administration leading her forward in her career.

She also worked at the United Nations Theatre Centre India in the 1950s. Sneih ran the main office, keeping in touch with the many branches across India. She worked with many artists during her time with them, including Dave Brubeck, a legendary Jazz pianist and composer, and Bil Baird, a renowned American puppeteer.

She later got a job with the United States Information Services and worked with their cultural attaché. Being in New Delhi, it was close to all the embassies, giving her a chance to learn from many different cultures and enjoy many of the visiting cultural programs.

During her time with the Information Services, she was offered a scholarship to study in the United States. The East-West Centre Scholarship had started in 1960, and they offered the fully-paid scholarship to Sneih.

Sneih was not really interested in continuing her studies, but the scholarship focused on the drama and theater and the campus was located in Honolulu, Hawaii.

She was in Hawaii from 1961-63 and earned her MFA degree in Fine Arts, Drama, and Theatre. She also got the opportunity to spend the summer of 1962 travelling throughout the United States visiting places of theatrical interest.

She saved up her money while she was studying and rather than fly directly back home at the end of her degree, Sneih decided to travel the world.

She took a boat from Honolulu to San Francisco, US; a train across the US to New York, The original liner, Queen Mary to Southampton, UK.   She then traveled through Europe, by air, visiting family and friends as she went. She caught another boat in Port Said, Egypt, and arrived in Bombay, India, two months after her journey began.

“I was unmarried and had no real responsibilities,” Sneih said. “I was older, 31 at the time.”

She got back to New Delhi and began job hunting again in 1964. She started a professional theatre group with friends, and was heavily involved with the community English language theater, when something unexpected happened.

A family friend invited Sneih to have dinner on Monday. The woman wanted Sneih to meet her nephew, Kirti Charan.

Kirti had been living and working in Canada, and had come to India for a short visit. He had no idea he was being set-up at dinner.

“My poor husband; he had been in the States for 10 years and had no intention of being set-up for marriage,” Sneih said with a laugh.

Kirti worked at McGill University as a professor, and was staying with his aunt during his trip. After the family dinner, Kirti asked Sneih if he could take her to tea the next day.

“While we were there — and there were people in the restaurant whom I knew — he just says to me, ‘Well, as far as I am concerned, how about it?’” Sneih said, laughing hard. “How unromantic!”

Sneih asked for some time to think about it before getting married. The couple met again later in the week on Sunday, and by that time Sneih had decided it was meant to be. Her only stipulation was that Kirti meet her parents before they were married.

It was monsoon season, and Sneih’s parents lived high up in the mountains. By happenstance, an army officer was going up to see Sneih’s father and offered to bring them down to meet Kirti. They met that weekend.

Within a week of meeting, Kirti and Sneih were engaged.

“It’s funny, I had a strong feeling — I believed there was no such thing as love at first sight — but it just felt right,” Sneih said.

Kirti then had to return to Canada. Sneih immediately began working to get her paperwork in order so that she could join him. Four days after she landed in Canada, Kirti and Sneih were married in Montreal.

They enjoyed over 52 happy years together before Kirti unfortunately passed away. They had two daughters, both of whom live in the US, and now have two grandchildren.

From her work, Sneih was fluent in English and French, and she was used to the Canadian culture. While in Montreal, she occupied herself initially by working for a short time with a newly founded lunch-time theater group. Once she became a parent, she stayed at home raising her family. However, she did become a member of a small bi-lingual puppet group, which presented English and French plays in schools, libraries and hospitals. She also earned a Diploma in Institutional Administration from Concordia University.

When Kirti retired in 1992, they both relocated to St. Catharines. Both their daughters had started their own careers, so they were free to travel and enjoy retirement as long as their health permitted.

In St. Catharines, Kirti and Sneih joined the multicultural society to help new immigrants coming to Canada. While working there, they were always paired with people who were from a different cultural backgrounds than their own. They also volunteered at the General Hospital, Kirti in the palliative care unit and Sneih in the childrens’ department and the ER.

“People are people. It doesn’t matter where you come from,” Sneih said. “I have been very fortunate to have been exposed to the world.”

In 2009, Kirti had a stroke, during which he lost mobility on his left side. It became impossible for them to return to their three-storey town house. They decided to move into Heatherwood Retirement Residence in St. Catharines, ON in early 2010.

Today, Sneih continues to enjoy life. She is extremely active in the community at Heatherwood. She often runs programs for other residents, particularly fitness programs. She is also the head of the Residents’ Council.

“Living at Heatherwood is like living at a university, where we learn new lessons every day,” Sneih said. “I’ve made friends. I’ve gotten to know so many nice people who I never would have met... it is home.”

Sneih has a strong belief in life-long learning and in raising up the women around her.

“There are so many woman leaders… there are so many people before me that I can think of, who have shown what women can do,” Sneih said. “Open your eyes; open your heart, and let the world teach you. There is so much to learn!”

“Too many people build walls and refuse to change,” Sneih said. “Try everything… you could open your eyes to a whole new experience!”

Next Post
Get your senior living questions answered in our new blog!

Each month, we take a moment to recognize some of the outstanding team members who work with us. Thank you all for the work you do each day.
In: Stories from our Team
END_OF_DOCUMENT_TOKEN_TO_BE_REPLACED

Fairwinds Lodge Retirement Residence paid tribute to the previous generation of nurses — the residents who now live with them.
In: Innovative Programs
END_OF_DOCUMENT_TOKEN_TO_BE_REPLACED

Each month, we take a moment to recognize some of the outstanding team members who work with us. Thank you all for the work you do each day.
In: Stories from our Team
END_OF_DOCUMENT_TOKEN_TO_BE_REPLACED