Bloomington Cove add a dash of technology to their dementia run 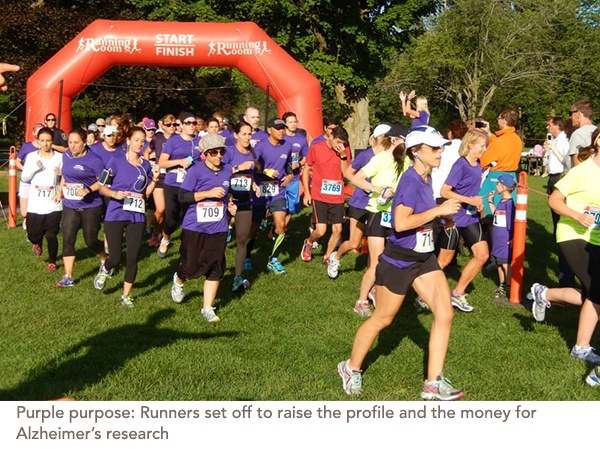 Where can you get fit, enjoy a free pancake breakfast and raise money to fund a cure for Alzheimer’s disease?

Participants on the 5K, 10K and Kids Dash run and walk events, took the trail route through the provincial park, and were issued with special t-shirts containing a chip that records their time crossing the finish line. Everyone received a medal and a swag bag for taking part.

Bloomington Cove started this event in 2010 with forty participants walking along Main Street in Stouffville town centre. In 2012, they added a run; and the following year it was moved to Bruce’s Mill before being rebranded as Dash to Defeat Dementia in 2014.

This year had over 250 participants as well as fifty volunteers to help make the morning safe and enjoyable for everyone.

“Every year the event grows in popularity,” said Bloomington Cove’s executive director Janet Iwaszczenko. She anticipates raising their target of $25,000 from this year’s run to add to the $89,000 they have already donated to the Baycrest Foundation for Alzheimer’s research since 2010. This will bring the expected grand total raised to $114,000 since the events first began.

A unanimous decision was made by employees and families to raise money directly for medical research to find a cure for Alzheimer’s and related dementias.

“We’re inviting people to do this as a family,” said Janet, referring to the various runs and walks available for all ages, levels of fitness and capabilities within the community.

Many participants competed in the form of teams, including York Region Police who crossed the finish line four seconds before the Whitchurch-Stouffville Fire & Emergency Services.

Speakers at the event included Sienna’s CEO Lois Cormack, Janet Iwaszczenko, and the Mayor of Whitchurch-Stouffville Justin Altmann, who donated bananas for the runners. Bloomington Cove also offered a free pancake breakfast with produce donated from local grocers—enough to make over a thousand pancakes. That’s a lot of eggs!

The glorious sunshine was a stark contrast to the 2012 event when the heavy rain and strong winds of Hurricane Sandy added an unexpected challenge. But come rain or shine, Janet is determined to keep fundraising for this important research.

“This event is about being socially responsible and giving back to the community. Let's continue to work together to one day hear someone say, ‘I'm an Alzheimer’s Survivor’,” she said.

Alzheimer's is a terminal disease of the brain that erases memory and makes simple tasks difficult, such as eating and dressing. There is no known cure, and it is eventually fatal.

Bloomington Cove is a licensed long-term care community in Ontario entirely dedicated to dementia care for its 112 residents.

Each month, we take a moment to recognize some of the outstanding team members who work with us. Thank you all for the work you do each day.
In: Stories from our Team
END_OF_DOCUMENT_TOKEN_TO_BE_REPLACED

Fairwinds Lodge Retirement Residence paid tribute to the previous generation of nurses — the residents who now live with them.
In: Innovative Programs
END_OF_DOCUMENT_TOKEN_TO_BE_REPLACED

Each month, we take a moment to recognize some of the outstanding team members who work with us. Thank you all for the work you do each day.
In: Stories from our Team
END_OF_DOCUMENT_TOKEN_TO_BE_REPLACED