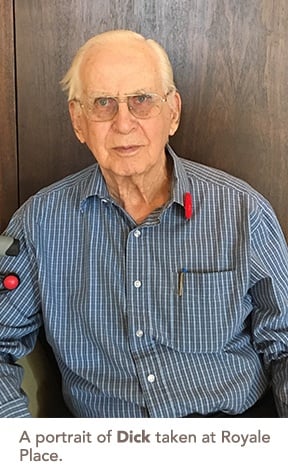 The tap of type writers fills the air with a symphony of sound. Richard Archambault, a cipher operator with the Canadian Armed Forces, adds to the music, his fingers encrypting a military message.

This scene played out for Dick in five countries over a span of nearly 30 years. He originally joined the army in 1950, at the age of 18, after deciding to apply his trade as a telephone linesman to the military.

“It was different,” he said. “I have no regrets for ever joining the military.”

Still, there were a few things you had to stay on your toes about. During basic training, failing to salute when you saw an officer would see you cleaning the 1,000 by 1,000 foot parade square with a toothbrush.

“It was something I’d never done before,” Dick said with a laugh, adding that you didn’t have to clean the entire square, or “I would probably still be cleaning.”

He worked as a lineman with the military until 1952, before taking a few courses and becoming a cipher operator in 1953.

There are many different types of ciphers, but all of them work to encrypt and decrypt messages, and most are similar in many ways to a typewriter.

He worked in Germany for a year before returning to Canada and his home town of Montreal in 1954. Dick had grown up on a quiet street in the north part of the city, and spent his days playing sports with his friends and brothers. When he returned home with the military, he ran into Kathleen, a sister of one of his childhood friends. The two started going out, and were married in Montreal in May of 1956.

A year later, Dick was reassigned. He bounced around Vietnam, India and China for a year before being assigned back to Canada.

“There were times when I was posted and I missed my family,” Dick said. “But I always felt the love and support Kathleen and our children gave me.”

He and Kathleen had one daughter and three sons. Dick said he and the family were always really happy with his time in the military.

“I got to be with people and I got to travel,” Dick said. “I saw a lot of places that I wouldn’t have ever seen, my family were happy with the traveling that they did with the military.”

Dick left the military in 1979, at the age of 47, and joined the Kingston Police department as a dispatcher.

“But then the gentleman who was looking after the seized property retired and I was asked if I would like to take it over, and that there is what I did.”

He worked with the police for 19 years, and enjoyed it very much. After retiring in 1998 he volunteered at the Military Communications and Electronics Museum.

“I had some years in the military, so when we were working and wondering what this was, or where we would put this, or put that, I could help,” Dick said. “One of the best things I ever did was join the military. My dad was a WWI veteran with the Canadian Grenadier Guards of Montreal.”

This past year, Dick and Kathleen celebrated their 61st wedding anniversary, and continue to enjoy life at Royale Place Retirement Residence in Kingston, where they live. Dick has four medals from his time with the military, including medals for: long service, volunteer service, and for working in Vietnam as a cipher operator after the Vietnam War.

Next Post
Capturing the sun, the wind, and the stars

Team Members in long-term care have sparked joy in residents with unique and exciting programs.
In: Innovative Programs
END_OF_DOCUMENT_TOKEN_TO_BE_REPLACED

Each month, we take a moment to recognize some of the outstanding team members who work with us. Thank you all for the work you do each day.
In: Stories from our Team
END_OF_DOCUMENT_TOKEN_TO_BE_REPLACED

Lieutenant Colonel John Beswick celebrated his 102 birthday at Carolina Retirement Residence with family and special visits from the fire department and Towne Crier.
In: Centenarians
END_OF_DOCUMENT_TOKEN_TO_BE_REPLACED