A published poet, Ian Bruce has written more poems than he knows what to do with—and he only began writing them last summer.

He was a poet, but he didn’t know it 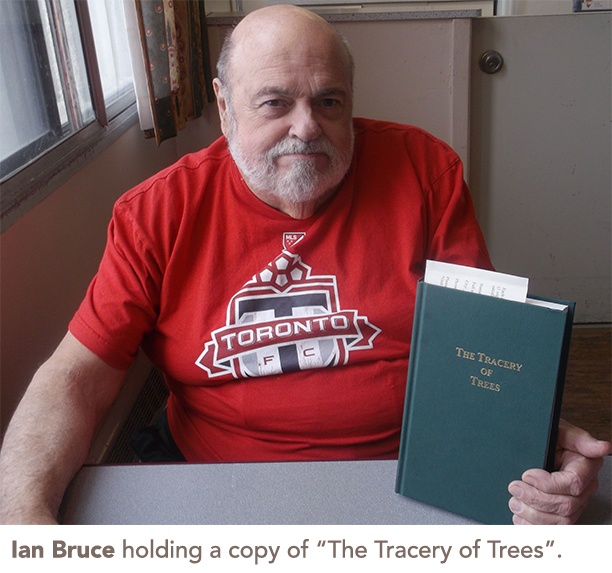 A published poet, Ian Bruce has written more poems than he knows what to do with—and he only began writing them last summer.

“I just thought it was a challenge, and I wanted to write something. I’d never done it before,” Ian said. “[Now] I’m doing it every day. I mean, since lunchtime I’ve written five poems.”

Ian, a resident at Rockcliffe Care Community in Scarborough, began writing after attending a group writing program led by Jocelyn, a program assistant. At one of the sessions, Jocelyn mentioned that there was a poetry competition being held by the Poetry Institute of Canada, and that she thought it would be good for people to write something for it. Ian’s poem Places in my Life won, and was published in the book The Tracery of Trees in January.

“From that time on I got hooked on writing poems and can’t seem to stop,” Ian said. “I wake up in the morning [and] I’ve already got two or three running around in my head.”

Ian likes to write in the lunchroom, because it’s big and open. He’s not distracted by the other things going on in the room, and is able to sit and disappear into his own world with ease. He usually writes until about three in the afternoon every day. His poems are about anything that comes to mind, whether it’s a part of his past or something that’s recently happened.

He said that writing keeps his head clear, and he finds that when his head is clear he’s more active.

“It’s just something that seems to click in my head and I can do it. And I try to encourage others to do likewise. Not necessarily write but… find something you can do and do it. There’s a lot of value in life, why waste it?” he said.

Ian knows a bit about life, as Places in my Life shows. The poem jumps from London, England, where Ian was born, to Malaysia, where he briefly served in the army, to Toronto and Rockcliffe, where he now lives.

Ian joined the British Army in early 1960, hoping to pick up a trade. At the time, you could join the army and learn a trade, as long as you applied it to the army. Ian learned heating and air conditioning. He got sick while in Malaysia (Malaya at the time) and was given medical discharge.

He stayed in England for a while before moving to Toronto. When he was writing Places in my Life, Ian said he sat down and just started thinking about what he’d done and where he’d been.

“I was thinking about what to write about, and I thought: Well the easiest thing to write about is myself, and that’s what I did. I wrote about where I lived,” he said.

Places in My Life
By: Ian Bruce

London is a busy place
Around St. Paul’s and down the Strand
All the places are fine and grand!

Malaya is a nice place to visit
But I would not like to stay
I guess people there don’t do things my way
But I stayed just the same due to Army pay
I am glad to finally get away!

Toronto is now my home
I feel free to roam
I met my wife
Which led to a new life
In England taking a wife is trouble and strife
But to me she was a loving wife!

Rockcliffe is now where I reside
I look at life with aim and pride
The staff look after me very well
Which makes me feel so swell
The food is tasty
They ensure my safety
So I have a feelin’ of trust
To use my brain so it won’t rust!

The Kingsmere Spirit Squad put on a performance for residents to enjoy from their balconies.
In: Stories from our Team
END_OF_DOCUMENT_TOKEN_TO_BE_REPLACED

Thank you to all of the personal support workers for the amazing work they do every day.
In: Stories from our Team
END_OF_DOCUMENT_TOKEN_TO_BE_REPLACED

Thank you to all of the amazing nurses working with Sienna and across the globe for everything they do each day.
In: Stories from our Team
END_OF_DOCUMENT_TOKEN_TO_BE_REPLACED