Rideau Retirement Residence is bringing the warmth of hugs back to residents and their families while maintaining social distancing.

Hugs at a distance 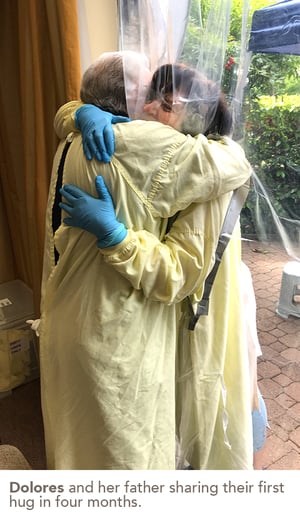 It’s been several long months since the beginning of the pandemic, but thanks to the ingenuity of the team at Rideau Retirement Residence in Burnaby, BC, residents and their families are finally able to see and hug each other again, all while maintaining social distancing.

“The hug with my father after almost four months was indescribable,” said Dolores, the daughter of a resident at Rideau. “The ability to be able to hug him, even if was through a plastic shower curtain, was overwhelming, heartwarming, and fulfilling. [It was] the longest hug my father and I have ever had.”

“We needed to figure out a way that we could get families and residents reconnected and let them have quality time together,” said Teena Love, General Manager at Rideau. Teena’s husband helped her come up with the idea for the hug curtain after seeing something similar on social media. They adapted the original concept, ensuring it followed all PPE guidelines, before implementing it at Rideau.

When asked how she felt about being able to bring this experience back to residents and their families, Teena said, “Well, it pretty much makes me cry when I think about it too much. It makes you feel like you’re doing the right thing and you’re helping people heal.”

Next Post
Laughter keeps you young: Centenarian recalls his life

Residents at Rosewood celebrated Thanksgiving with pumpkins and a turkey feast.
In: Innovative Programs
END_OF_DOCUMENT_TOKEN_TO_BE_REPLACED

Residents spent the summer caring for monarch caterpillars and watching as they transformed into beautiful butterflies.
In: Innovative Programs
END_OF_DOCUMENT_TOKEN_TO_BE_REPLACED

Awarded for a kind heart

“I feel like I’ve just won the Oscar!” said Pat, winner of the 2020 BC Seniors Living Association’s L.E.A.P. Award.
In: Awards & Achievements
END_OF_DOCUMENT_TOKEN_TO_BE_REPLACED