Major League baseball player and coach of Team Canada, Eric Mackenzie talks about his love of the game.

‘I always wanted to play baseball’ 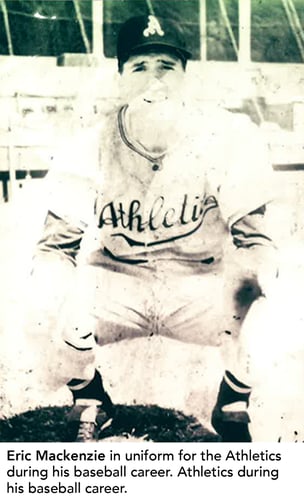 “I always wanted to play baseball,” Eric Mackenzie said. He was born in Glendon, Alberta in 1932 and grew up on the farm. From a young age, he knew that the farming life was not for him, but it was all Glendon really had to offer. So he set his eyes on a seemingly impossible dream: Baseball.

His father encouraged him to play. When Eric came of age in 1949, life in Glendon was tough. WWII had just ended, and jobs were few and far between. He bought a one-way ticket to Leamington, ON to tryout for the big leagues.

Eric had quit school in Grade 10 to work on the farm and focus on baseball. He played as a catcher. From Leamington, Eric was signed to the Philadelphia Athletics, a US-based team. He set off for spring training in Georgia.

“I travelled a lot of miles and saw most of the United States from a bus,” Eric said. “Those eight years were the best times of my life… it was my lifetime dream to play baseball.”

Eric can still remember his first day of spring training.

“I was a catcher… when you sit all day on your haunches, in a crouch, your legs almost seize-up on you,” Eric said. Near the end of the day, one of the coaches told him to practice at bat. He took three swings before another player sent him back to the bullpen. “They didn’t like to see new people. They were always worried you’d be the one to take their spot.”

Eric started as a player in the D-club, but he didn’t stay there long. He made his way up through the ranks, playing the majority of his games at the A and B rank. In 1954 Philadelphia Athletics changed hands, becoming Kansas City Athletics. In 1955, Eric played in his first Major League game for the Kansas City Athletics.

Although the team changed hands during Eric’s eight-year career, he was never signed to another team.

In 1956, Eric was married. He and his wife, who was from Leamington, had a son and a daughter.

In 1958, Eric retired as a player and went on to coach baseball. At first, he coached local Canadian baseball teams.

“And then I got a call from Baseball Canada to coach the Canadian baseball teams,” Eric said. He was one of several coaches for the team, and he travelled around the world, from Italy to Japan. He also coached at the Pan American Games and the 1984 Olympics, which were held in Los Angeles, U.S. He served as a coach with team Canada for nine years.

After his coaching career, Eric worked in Parks and Recreation as the recreation director. He enjoyed the job for many years, and retired in 1990. He continued to volunteer as a ballpark groundskeeper. He saw almost every park in Ontario and the southern States. He retired from his volunteer work in 2018, at the age of 86.

Today, Eric continues to enjoy life at Fairwinds Lodge Retirement Residence in Sarnia, ON. To this day, he says The Athletics, which are now Oakland based, are his favourite team.

“Baseball is a big item around the world,” Eric said. “It’s a sport where you need a lot of background, and there’s lots of competition… [but] there’s a lot of comradery and a lot of laughs in baseball.”

Each month, we take a moment to recognize some of the outstanding team members who work with us. Thank you all for the work you do each day.
In: Stories from our Team
END_OF_DOCUMENT_TOKEN_TO_BE_REPLACED

What is the secret to longevity? 103-year-old Ruth Wilson has an answer that will surprise you!
In: Centenarians
END_OF_DOCUMENT_TOKEN_TO_BE_REPLACED

COVID-19 Vaccinations: What you need to know

Vaccines are being rolled out across the country, and many people have questions. We’d like to answer them and take a moment to thank the team members at Sienna who have already been vaccinated.
In: Stories from our Team
END_OF_DOCUMENT_TOKEN_TO_BE_REPLACED