Lifestyle Consultant at Cedarvale Lodge Retirement Residence in Keswick, was nominated for the 2016 Change our World Community Award by Douglas Hickey.

It Has Changed Them Forever 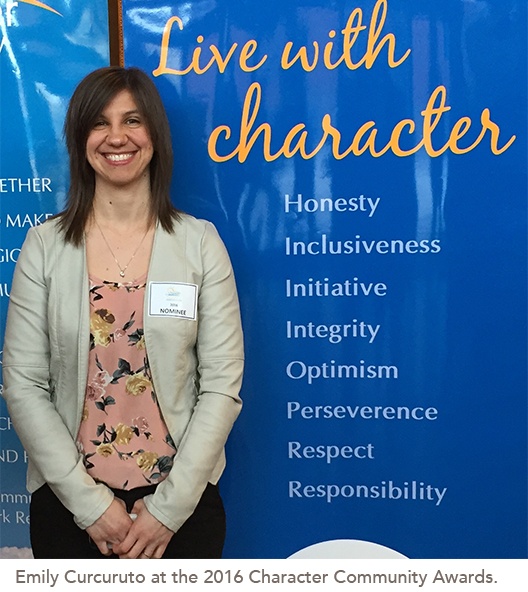 Emily Curcuruto, Lifestyle Consultant at Cedarvale Lodge Retirement Residence in Keswick, was nominated for the 2016 Change our World Community Award by Douglas Hickey, a teacher who worked closely with her on the Cyber Seniors program.

“Emily provided such an incredible opportunity for my students to learn so many valuable life skills. It has changed them forever!” said Doug.

The Cyber Seniors program, which had its first run at Cedarvale Lodge in 2014, used technology to help bridge the generation gap between high school students and seniors.

Every week for two months, Emily drove 11 seniors to Keswick High School where they would meet Doug and his students. The students and seniors would then pair together and pick-up where they had left off the week before, a computer or iPad between them. It quickly became evident that there was much more to this program than students teaching seniors how to use the Internet—they were building connections. Slowly, friendships were building, and by the end of the two months everyone was sad to see the program come to an end.

“It was the opportunity to do something different within the home and to actually create these long lasting relationships with residents and high school students,” Emily said. 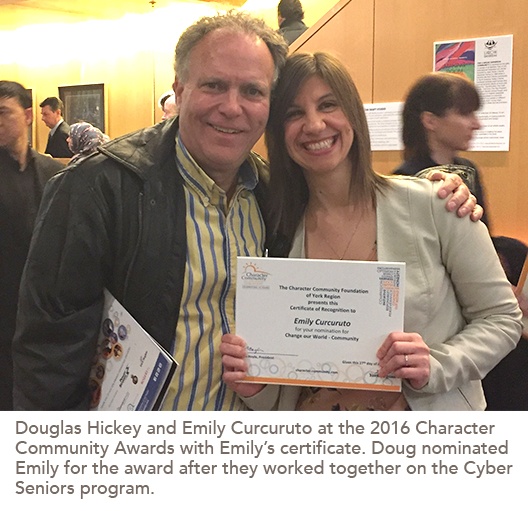 Cedarvale Lodge has a co-op program with Keswick High School that pre-dates Cyber Seniors, so Emily and Doug had worked together before. Which is why when the idea for Cyber Seniors started swirling around in Emily’s mind, she knew Doug was the person to talk to about it.

“Doug was phenomenal during the whole thing! He was my cheerleader right beside me and definitely an amazing partner to work with,” Emily said. “I couldn’t have done the program without him.”

The award ceremony took place on April 26 at the Richmond Hill Centre for the Performing Arts. Although she didn’t win the award, Emily said she was honoured to stand on stage with such influential people.

“When I read what the actual award stood for… I was very humbled by it to be honest with you,” Emily said. “I didn’t expect any awards. I just wanted to do a program that would be meaningful for the residents and the students. I just wanted it to be as special for them as it could be.”

Tags: Innovative Programs, Stories from our Team, Awards & Achievements, Cedarvale Lodge Retirement and Care Community, Ontario, Retirement, Keswick, ON
PREVIOUS POST
He was a poet, but he didn’t know it

A housekeeper at Court at Laurelwood, Diane has stepped-up and into the role of impromptu haircutter for the residents.
In: Stories from our Team
END_OF_DOCUMENT_TOKEN_TO_BE_REPLACED

The Kingsmere Spirit Squad put on a performance for residents to enjoy from their balconies.
In: Stories from our Team
END_OF_DOCUMENT_TOKEN_TO_BE_REPLACED

Thank you to all of the personal support workers for the amazing work they do every day.
In: Stories from our Team
END_OF_DOCUMENT_TOKEN_TO_BE_REPLACED