Bloomington Cove Care Community won the Home of the Year Award from the Ontario Long-Term Care Association for their Person-Centred-Care approach.

Simon, an orange and white cat, purrs softly, lifting a leg to lick. When his preferred scratch-spot is hit, he rolls over for a full belly rub. All of this seems normal — except that Simon isn’t a real cat.

Simon is an animatronic designed to provide comfort for residents, although Janet Iwaszczenko, executive director of Bloomington Cove Care Community in Stouffville, said she wouldn’t mind having a Simon at home.

“I was showing him to someone the other day, and after they walked away I realized I was still petting him,” said Janet. “He’s just so comforting.”

Simon isn’t the only animatronic to call Bloominton Cove home. He’s joined by a grey cat and several baby dolls that not only make noise, but also breathe and have a heartbeat. At first glance they appear entirely real, and have been mistaken for real babies by unprepared guests.

Their purpose? They’re part of the secret to Bloomington Cove’s success. Bloomington Cove is the only licenced long-term care home in Ontario to only serve people with a dementia diagnosis; despite this, they’ve found a way to not only reduce dementia behaviours, but also antipsychotic medication. Their philosophy is called person-centred care, and it won them the 2016 Home of the Year Award from the Ontario Long-Term Care Association (OLTCA). 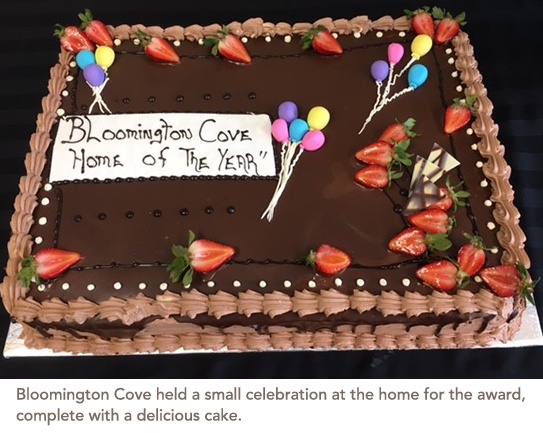 “This is a special award, nominated by the residents of the long-term care home, that demonstrates significant progress in creating a home-like environment, promoting a relationship-centred culture and advances the Residents' Bill of Rights,” the Ontario Retirement Communities Association (ORCA) said in their newsletter, ORCA in Action, which was published in December 2016. “The home has focused [on]… caring for residents according to residents’ life time practices and habits... Life doesn’t end simply because you move into a LTC home, and in reading the submission of the winning home, it was clear to OARC’s Board of Directors that [Sienna] believes that life continues to be full of purpose and possibility. Congratulations Bloomington Cove!”

The key to person-centred care, according to Janet, is having a good team, and engaging your team. Her first meeting every morning is at 8:15 am with her environmental team, who look after the laundry, cleaning and maintenance of the care community. During the meeting they go over which residents may require extra attention. Later, Janet meets with the programing team, nursing team and others. Teams meet all throughout the day, meaning that by day’s end, everyone knows what is going on with each resident.

“[Environmental and housekeeping team members] are equally as important to the care of the residents as anyone else in the building, and if you’re going to say that you have a team approach to care, then that team has to be all of you. Also, their view, their opinion, is equally as valid as anyone else. You don’t have to have a nursing degree to give a suggestion on what might benefit a resident,” said Janet.

She goes on to ad that each home area has a binder detailing residents’ preferences in music, meaning any team member can get them an iPod and some headphones to brighten their day. “It’s everyone looking after the resident together,” she said.

“Never underestimate your team members, they will always come through for you,” Janet said. 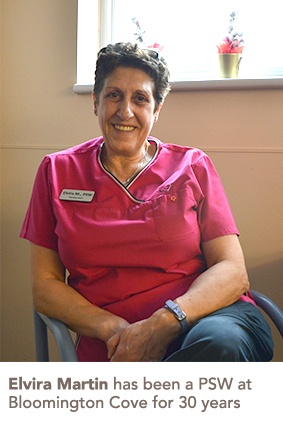 Elvira Martin has been a personal support worker (PSW) at Bloomington Cove for 30 years. She said that since they started doing person-centred care, she’s noticed a big difference with the residents. One of the steps they’ve taken is to make sure all the residents who can walk do so, even if they need support from two people, as long as it’s safe, the team members try to get them to walk each day.

“I’ve realized if you do that every day, even if it’s only 15 minutes, even just to walk from the dining room and that, it makes a difference; they can stand more. I really, really notice,” Elvira said. “I love the residents. I talk to them and sometimes they’re laughing and joking, and really I love them. That’s why I’m doing this job... for me to do this job for 30 years, it must be something I enjoy.”

Kymberli Shaw-Andros, a dietician who visits the care community regularly, said that “everything is so stable here.” The families are always happy.

Part of person-centred care is the atmosphere, which is very home-like at Bloomington Cove. Many of the room doors have wreaths, and there are plenty of lounges for residents to enjoy. There are music lounges, with 1950s décor, and baby rooms with cribs and drawers with doll clothes. There are even work benches with tools. One resident, who was a millwright, goes and works at a bench each day.

Life continues to be lived. During the January birthday party, team members could be seen dancing with residents and handing out pieces of cake. The room is bedecked with streamers and balloons, and a live singer takes everyone back to an earlier time. One couple in the audience are both residents at Bloomington Cove. After the performance is over, the gentleman patiently waits at the door while his wife speaks to everyone in the room.

“Nothing’s changed, has it?” a team member asks him with a laugh. “You told me that you’d always be waiting at the door, ready to go, and she’d want to speak to everyone at a party.”

He agrees with her, nothing has changed.

Next Post
What’s this 108-year-old’s secret? Never give up.

Thanks to the ingenuity of the team at Glenmore Lodge, this family was able to celebrate a birthday together.
In: Innovative Programs
END_OF_DOCUMENT_TOKEN_TO_BE_REPLACED

In celebration of International Women’s Day, Camilla Care Community in Mississauga raised $600 for Chantel’s Place.
In: Giving Back
END_OF_DOCUMENT_TOKEN_TO_BE_REPLACED

In partnership with Recreational Respite, Red Oak Retirement Residence is proud to offer a new Day Program to residents and seniors in the wider community.
In: Innovative Programs
END_OF_DOCUMENT_TOKEN_TO_BE_REPLACED