Charlie Gallagher joined the British Royal Air Force when he was 17 years old, flying over the darkened skies that clouded 1944 Europe. 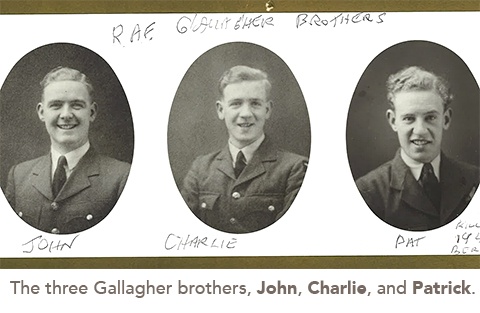 In 1944, 20-year-old wireless operator Patrick Gallagher was killed in battle in Berlin, Germany. Later that year, his younger brother, Charlie, followed in his footsteps, joining the British Royal Air Force.

“I was in at 17; I was a cadet,” Charlie said. “[I joined] because, see my brother had been killed, and my older brother was in it. All three of us, we all joined the air force.”

Previously, Charlie had been selling groceries at a store in Scotland, where he lived with his parents and two sisters. A third sister had died four years earlier.

“The brains went to my sisters. My one sister was a pediatric surgeon and the other was a dentist,”Charlie said. “I also lost my Uncle Patrick, he was in the army, and my brother-in-law Patrick got killed over in the Atlantic. So Patrick was not a lucky name.”

At 18, Charlie’s mathematical talents got him accepted into the air force to be trained as a navigator. He flew a variety of planes, including the Avro Lancaster, North American Harvard, and de Havilland. Charlie said that he “gobbled the experience up,” but when the war ended a few months later he didn’t see a reason to stay on. He and his older brother John, who served in the air force as a met officer, both survived the war. John went on to become a weather forecaster. But Charlie had his eye on other things.

In 1952 Charlie immigrated to Canada from Scotland. He found work, and a year later his fiancé joined him.

“As I used to say, she chased me all the way across the Atlantic,” Charlie said with a laugh. “No, we had arranged that she was coming over here and we were going to get married. She lived in Ireland and I lived in Scotland.”

Charlie met Patricia while he was still in the war. In 1953, they were married, and went on to have six children, three boys and three girls.

For his 80th birthday, 63 years after his time in the air force, Charlie’s children arranged for him to once again fly a North American Harvard out of the Canadian Warplane Heritage Museum in Mount Hope. He enjoyed the experience, and said it was exciting.

Today, he enjoys meeting new people at Lincoln Park Retirement Residence in Grimsby, which is close to his children, who he sees often.

“I’m thankful that my kids don’t have to go and be involved in war. It was terrible,” Charlie said, adding that he would advise anyone today to “stay away from war and go in peace.”

Read John’s autobiography, which details his imprisonment as a Polish civilian, his break for freedom, and his return as a soldier in the Polish army.
In: Traditions of Durham Retirement Residence
END_OF_DOCUMENT_TOKEN_TO_BE_REPLACED

Today, Fatima and Vishal are happily engaged, but they may never have dated at all if a resident at Weston Terrace Care Community hadn’t given them a push.
In: Stories from our Team
END_OF_DOCUMENT_TOKEN_TO_BE_REPLACED

A Master Warrant Officer in the Royal Canadian Air Force, Eugene’s true passion is for music.
In: Inspirational Life
END_OF_DOCUMENT_TOKEN_TO_BE_REPLACED