Vanessa Romero won the Nursing Senior Leadership Award through the Ontario Long-Term Care Association. But she didn’t always want to be a nurse…

‘The little things I do make somebody happy,’ Vanessa Romero, winner of the Nursing Senior Leadership Award. 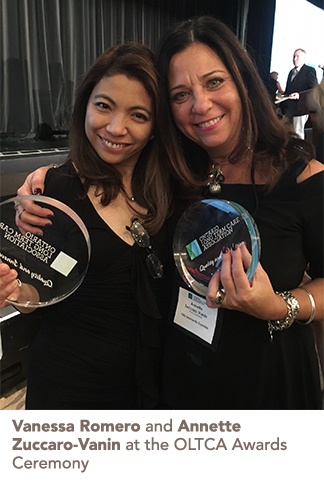 “It was very exciting,” she said, particularly because her favourite part of her job is being able to help the residents. “I like the fact that the little things I do… make somebody happy, especially the residents, it makes you feel good.”

Vanessa was nominated for the award, which is open to all nurses in Ontario working in long-term care, by Annette Zuccaro-Vanin, administrator at Villa Leonardo.

“Annette’s support is amazing,” Vanessa said. “There is so much learning and growth I have to do. It’s a big job, it’s a big responsibility, and you need that support from her ­— and my team too, the Villa Leonardo team, we have a very good professional relationship here.”

Vanessa loves her job, and she’s good at it — but she wasn’t always so certain she wanted to be a nurse.

Born in 1975 in the Philippines, most of the people in Vanessa’s family were in the medical field. It was because of this that she initially went into nursing, graduating in 1996.

“I wasn’t convinced nursing was what I wanted, so I went to a different career,” Vanessa said.

She applied for an office job, and worked in the corporate world for some time. She married in 1999, and came to Canada a few months later with her husband, who believed there would be better opportunities here. Again, Vanessa joined the corporate world. It wasn’t until the end of  the year, when a friend talked her into giving nursing another try, that she thought she might want to switch careers.

“I took the exam — I studied for a year, because I hadn’t practiced nursing for three years,” she said. “I studied hard for the exam and I passed.”

After passing her exam, Vanessa worked in a hospital. She quickly realized the environment wasn’t one she enjoyed, and so in 2004 she applied to work in a long-term care home.

“That’s when I knew that this was where I was more comfortable and happy, and this is the nursing field I like,” she said.

That home was Langstaff Square Care Community. A few months later she started at Villa Leonardo, where she met Annette, and she’s been there ever since.

“Vanessa was exceptional from the get go, always striving for excellence and to take on more projects and new initiatives,” said Annette, who nominated Vanessa for the Nursing Leadership Award. “She is always striving to learn and grow, and her ability to implement and sustain clinical projects is outstanding. Her commitment to nursing and to the residents’ quality of life is seen in her day to day work — everyday!”

“I’m very humbled and thankful, definitely,” Vanessa said, when asked how she felt about winning the award. “But at the same time very honoured, because it’s a big organization, the OLTCA is not just within Sienna; it’s a provincial award… So, definitely honoured, but also humbled.”

Next Post
After 30 years off the ice, Ivy returned to her old club

A housekeeper at Court at Laurelwood, Diane has stepped-up and into the role of impromptu haircutter for the residents.
In: Stories from our Team
END_OF_DOCUMENT_TOKEN_TO_BE_REPLACED

The Kingsmere Spirit Squad put on a performance for residents to enjoy from their balconies.
In: Stories from our Team
END_OF_DOCUMENT_TOKEN_TO_BE_REPLACED

Thank you to all of the personal support workers for the amazing work they do every day.
In: Stories from our Team
END_OF_DOCUMENT_TOKEN_TO_BE_REPLACED