Donna was convinced she would never marry again. But fate had other ideas, bringing her and Gordon together when they needed one another most. 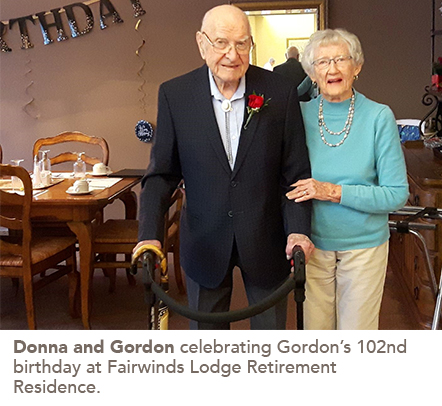 Gordon stood on the back of the plow, a team of horses pulling him slowly forwards, preparing the fields for planting.

Born in 1917 on a farm near London, ON, Gordon’s childhood was probably filled with moments like this, plowing a field or helping with the harvest. He’d worked hard in his final years of high school, hoping to become a printer, but the Great Depression had put a damper on his dreams, and there were no printing jobs to be had. So here he was, five years later, standing on the back of a plow while a team of horses pulled him slowly forwards.

It was in this moment, surrounded by empty fields and an open sky above him, that Gordon began to think he might want to become a minister. Several years later, at the age of 30, and with a university degree already under his belt, Gordon graduated from Emmanuel College in Toronto as a minister.

By the time Gordon met Donna in 1960, he was well established as a minister at High Park Church. Donna, her husband, and their two sons, had recently moved around the corner from the church. Gordon also had a family, a wife, a son, and two daughters. Donna would often volunteer at the church, and the two families were very close. Gordon even baptized Donna’s youngest son. In 1977, Gordon and his family moved out of town; however, they continued to exchange Christmas and holiday cards with Donna and her family.

“Both families kept in touch until 2000. That's when my husband died,” Donna said. “Then I kept in touch with Gordon’s wife… my older son and his youngest daughter played in the school band years ago together… and his son, who's now lawyer, he was our bread man.”

After her husband died, Donna decided to do some traveling. Before leaving for Portugal, Gordon’s wife gave her a travel journal, to record her adventures in. “I had made up my mind I was never going to get married again,” Donna said.

Unfortunately, Gordon’s wife passed away shortly after Donna returned from her trip.

During the summer of 2003, Donna was working in her back garden when a neighbour came to get her, saying that there was someone standing at her door. When Donna answered the door, it was Gordon.

Donna invited him in for some coffee; however, they both had dinner plans, and so Gordon left shortly after.

“Just after that everybody at the church started asking about Gordon,” Donna said. “‘Has anybody heard how Gordon is doing?’ and nobody had heard, so I thought, ‘okay, I'll call him up and see how he's doing.’”

One phone call led to another. Soon, the two were seeing each other and speaking on the phone regularly.

They’d been seeing each other for a while when Gordon fell, cracking his rib. His son asked Donna if she’d come up to see him at the hospital for a few days.

“A minister came to visit Gordon, and he knew we had been seeing each other and his comment was, ‘if you two ever decide to tie the knot I would be very privileged to do the job.’”

Not long after, he did. Gordon and Donna were married in Goderich, ON, in 2004. Their reception was hosted at the home of Gordon’s son and daughter-in-law, where the couple celebrated with close friends and family.

“He was with his first wife for 56 years — I was with my first husband for 47 years — you know, you don't take a second marriage lightly,” Donna said. “It's serious business… I always used to say to Gordon, ‘50 years ago, when I was watching you up at the pulpit giving a sermon, there’s no way that, in my wildest dreams, I ever would have imagined that we would ever come together in any way shape or form.’”

But they did. Gordon and Donna have been happily married for 15 years, and continue to enjoy life at Fairwinds Lodge Retirement Residence in Sarnia, ON, where they live. They enjoy looking at old photos together, playing board games, and occasionally sleeping in and having breakfast delivered to their suite.

“As far as Gordon is concerned, he has always said, all the time I've known him, [he’s said] ‘I have no regrets,’ and I think it's wonderful for anybody to say that.”

Today, Don Simpson turns 107. Despite his age, he’s been seen riding the Big Bike for Heart, and is always the first one to join in on a good time.
In: Centenarians
END_OF_DOCUMENT_TOKEN_TO_BE_REPLACED

Today, Fatima and Vishal are happily engaged, but they may never have dated at all if a resident at Weston Terrace Care Community hadn’t given them a push.
In: Stories from our Team
END_OF_DOCUMENT_TOKEN_TO_BE_REPLACED

A Master Warrant Officer in the Royal Canadian Air Force, Eugene’s true passion is for music.
In: Inspirational Life
END_OF_DOCUMENT_TOKEN_TO_BE_REPLACED