Sitting as an air gunner on a bombing plane in WWII, it was not uncommon for the open air turrets to reach -40 degrees Celsius. To make matters worse, it was impossible to go use the washroom on these 8-hour flights.

When Hell Freezes Over 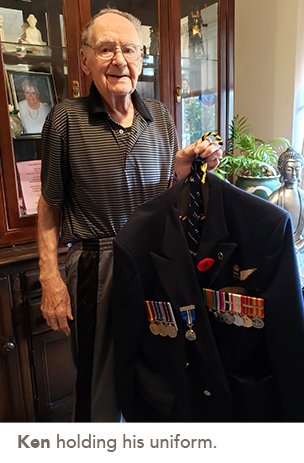 Ken was born in Sunderland, England in 1925. When he was 15 years old, Ken’s father enlisted him in the Air Training Corp in the hopes that it would give him some structure. Ken can remember riding his bike up the hill as a kid and watching the trainee pilots. Occasionally they’d take him up with them, even though they weren’t supposed to.

He joined the Home Guard the following year. Developed as a last defence against the Germans, England’s Home Guard was mostly composed of men who were too young or too old to join the main army.

“Every fifth man had a World War I rifle, and the others just had swords or clubs etc. We didn’t really have anything to defend ourselves.”

During this time, Ken lived in his hometown and was engaged in German Air Raids.

“I went through the Blitz, which is when the Germans were dropping bombs on my home town.”

“Well at first — I was on top of a hotel, that’s where we were all staying —and I heard this noise. And it looked like an airplane coming across, and that’s what we thought it was. But then it came down, and we still didn’t realize what it was when it came down, and then it exploded. After that, whenever we saw one of them come down we used to go to the air raid shelter, because as soon as the motor stopped you knew it was coming down,” he said. “When there was an air raid coming people used to go down [to the subway] and lie on the lines. People took their blankets and everything with them. There would be entertainers coming around while the Germans were dropping bombs on us.”

When the sirens went off in the middle of the night, it was Ken’s job to get his mother, grandmother, and younger brother out of the house and into the bomb shelter. He’d leave his clothes lined up to go before he went to bed. He said it became so routine, that sometimes he’d find himself up and getting ready to leave the house before the siren even went off. He can still remember the first time he saw V1 Rockets, or Doodlebugs, over London.

Ken joined the air force in 1942, at the age of 17. He had to get his mother’s permission to join. He was transferred to Bomber Command, and became an air gunner on large air craft, which held seven men. According to Ken, most of the crews were made of teenagers or men in their early 20s.

As an air gunner, he would sit in one of the plane’s turrets. The turret had four machine guns and was completely exposed to the elements. Flying at an altitude of 20-30 thousand feet, it was not uncommon for the air outside to hit -40 degrees Celsius. His sitting area was not large, and he had a lot of equipment, making it cramped. With the varying temperatures, he’d often be wearing several layers of clothes, including three pairs of gloves.

After the raid terminated, bombers headed back to England, often followed by German fighter aircraft. In case of engine failure, the aircraft was forced to “ditch” in the North Sea. Many crews were lost in this forced landing due to extreme cold water temperatures, drowning, or injuries.

After briefings, survivors were treated with bacon and eggs for breakfast. The hard part was going back to their rooms to see empty beds of crews that did not return.

“Air crew took an awful beating by the end of the war. There was 55 thousand casualties.”

Around 1944-1945 Ken was stationed in British Columbia, Canada. At the time, unmanned hot air balloons filled with explosives were being sent over from Japan to Canada and America. Only a few people were killed by the thousands of balloons that were built. However, that wasn’t their main purpose. Ken said the balloons were mostly used to hurt moral and start forest fires. At the time, the government leaned heavily on the press not to publish news or information about the balloons.

After the war, it became increasingly difficult to get jobs in England. In 1947, Ken immigrated to Canada and joined the Royal Canadian Air Force. He was part of the Crash Fire Rescue Services. During the Cold War, he worked with NATO Forces and was stationed in Metz, France.

When he left the air force in 1976, Ken joined Transport Canada Crash Fire Rescue and served as the Fire Chief at Toronto International Airport, in Canada. He retired from the service in 1995 and went on to form seniors’ variety shows with his wife, Grace. Together, the two collected a group of talented seniors, performing many shows in the years to follow.

Ken has received numerous awards, including a 46-years of service award from Jean Chretien, Prime Minister of Canada; and a certificate of merit from the Canadian Air Line Pilots Association for his part in the response to the DC-9 overrun accident at Toronto International Airport in June 1978.

Today, he continues to enjoy life at Woods Park Care Centre in Barrie, ON.

Our residences and care communities welcomed 2021 with hope and joy!
In: Innovative Programs
END_OF_DOCUMENT_TOKEN_TO_BE_REPLACED

We’d like to take a moment to pay tribute to the resilience and dedication of the over 12,000 Sienna team members who have been working out on the frontlines of the pandemic. You are all heroes.
In: Stories from our Team
END_OF_DOCUMENT_TOKEN_TO_BE_REPLACED

Read hopeful and uplifting messages from residents. Their wisdom will inspire you!
In: Innovative Programs
END_OF_DOCUMENT_TOKEN_TO_BE_REPLACED