Charlotte gifted her two cats, Sparkie and Raider, eternal life by writing a children’s book inspired by their many adventures.

After 10 years in a drawer, this children’s book is finally for sale 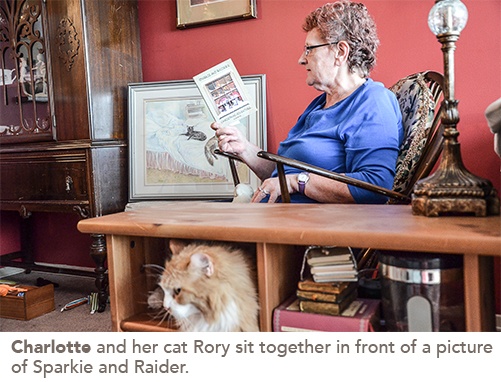 When Charlotte Daly found a stray kitten in a parking lot, she named him Raider and took him home to meet her other cat, Sparkie. Their adventures together became the inspiration for a book.

“I was at a creative writing course in 1992, and the teacher suggested we write a story over the Christmas break,” said Charlotte, who has worked as a Personal Support Worker (PSW) at Fountain View Care Community since it opened in 2001. “I find that once you start writing and really thinking about it, the story comes together.”

She put her story in a drawer for 10 years, and showed it to one of her four brothers one day.

“The next thing I heard, it was in print,” she said.

Her brother had 300 copies printed in England, and sent her half of them. She sold them all for $10 each.

“I sold them at work and to anyone who had heard about it. The cover is like a Dickens novel with two cats looking out of the window at Christmas.”

“Back in Ireland, we were told that animals could talk on Christmas Eve. So the story is set on Christmas Eve, where Sparkie and Raider go on an adventure to a farm and visit a dog called Ricky. The cats my friends had at the time are also characters in the book, and meet up to sing Christmas carols.”

Her son, now 28, is featured in the story. Charlotte, herself, even makes an appearance as the character Mistress Charlotte. She describes herself as a “total animal lover,” and keeps cats because they are easy to care for.

“I’m not a crazy cat lady, believe me!” she quips.

Born in Tipperary, Ireland, Charlotte moved to Canada in 1978 at the age of 27.

“I had worked as a PSW in a care community before, and I’ve always been comfortable with seniors and thought I’d like to work with them full-time in Canada. I started doing palliative care until I was offered a full-time job at Fountain View.”

Charlotte is now at retirement age herself, but likes to continue working, and has a strong work ethic.

“To suddenly stop working when you are that kind of person is hard,” she says.

People keep asking her if she has any plans to write more books.

“I would like to bring out a little more of what’s in there,” she said.

Prayer beads blessed by the Pope, seven bullet wounds, and one doctor changed everything for this WWII veteran.
In: Veteran Stories
END_OF_DOCUMENT_TOKEN_TO_BE_REPLACED

101-year-old Eddie served in the navy during WWII, worked as a draftsman and art duplicator, and saw a British Queen. Through it all, he’s kept his sense of humour.
In: Centenarians
END_OF_DOCUMENT_TOKEN_TO_BE_REPLACED

A housekeeper at Court at Laurelwood, Diane has stepped-up and into the role of impromptu haircutter for the residents.
In: Stories from our Team
END_OF_DOCUMENT_TOKEN_TO_BE_REPLACED