At the height of WWII, 18-year-old Andy Ambrosi joined the military medical corps in search of adventure.

In the medical corps 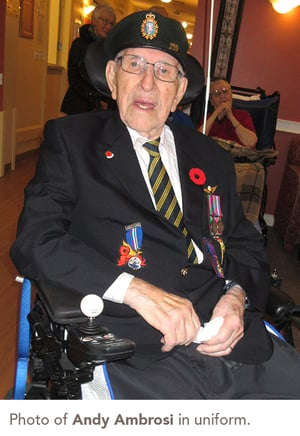 In 1943 WWII was in full swing, and 18-year-old Andy Ambrosi was looking for an adventure.

Born in southern Saskatchewan, he was working at an irrigation plant when he first decided to join the war effort. It was a common thing for young men his age to do, and a guaranteed job. Originally, he’d hoped to join the air force, but when his application was denied he joined the medical corps instead.

He was a private in the medical corps, and saw many wounded soldiers over his three years of service. He was awarded the British Continental Award and an Act of Service Button for his service.

After the war, Andy moved out of his father’s house and began working as a pipe fitter. He worked on the Princeton Highway, among other projects. In 1948 he met Mary. According to Andy, the two were “a match made in heaven.” They had one daughter, Mary-Anne.

Andy enjoyed his time in the service, and wishes he’d known that it was possible to stay with the military after the war was over. He believes that young people should spend some time in the cadets.

Today, he continues to enjoy life at Lake Country Retirement and Care Community, where he lives. He enjoys volunteering and helping people, as it reminds him of his time in the medical corps.

Imagination and a horse named Shorty

Each month, we’re pausing to recognize some of the outstanding team members who work with us. Thank you for the work you do each day. You are all truly heroes.
In: Stories from our Team
END_OF_DOCUMENT_TOKEN_TO_BE_REPLACED