Two football players from the BC Lions joined residents, families and team members for the Super Bowl 50 party.

Residents Get a Surprise Treat at Super Bowl Party

A chance meeting between Sienna’s senior general manager and a CFL wide receiver turned into an amazing treat for residents on Super Bowl Sunday. 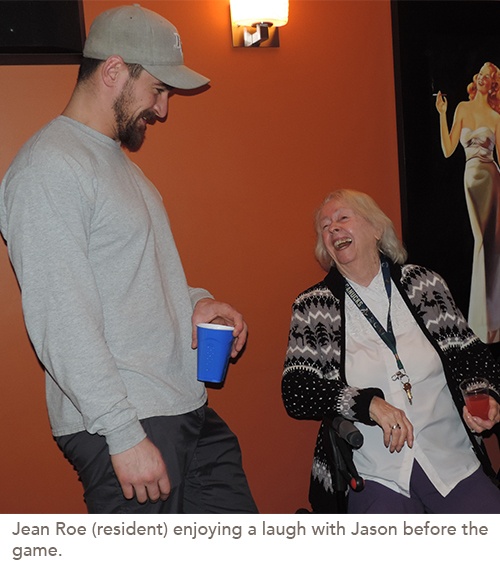 Two football players from the BC Lions—Shawn Gore and Jason Arakgi—joined residents, families and team members for the Super Bowl 50 party at Pacifica Retirement Residence on Sunday February 7.

“I was waiting for an appointment when a tall man in BC Lions sweatpants walked up to the desk,” said Rob Gillis, senior general manager of Pacific and Peninsula retirement residences in Surrey, British Columbia. “When he turned around, I immediately knew that it was Shawn Gore.”

Shawn Gore has played for the BC Lions since 2010, and was formerly signed to the NFL’s Green Bay Packers. The Toronto-born player was on the team when the Lions won the Grey Cup in 2011.

Rob and Shawn struck up a conversation in the waiting room that day, and discussed the BC Lions and the residents at Pacifica and Peninsula.

“I asked him if he would consider coming out to have a chat with our residents one day. He said, ‘Absolutely!’ and gave me his personal cell number and email address.” 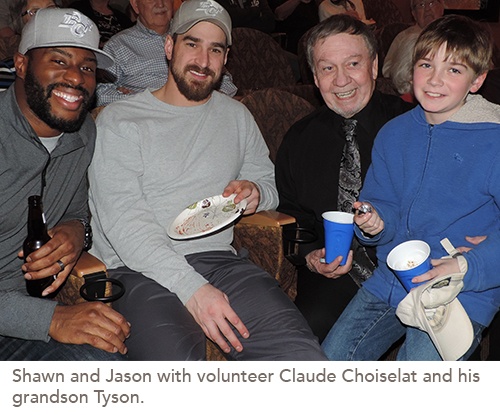 A few days later, Pacifica’s lifestyle consultant, Allison Giuliani, called Shawn to tell him about the Super Bowl party they were having. Before she could ask, Shawn offered to call a team buddy, and come for the afternoon.

He arrived wearing his Grey Cup ring, and took it off for residents to hold and wear. A short time later, BC Lions’ linebacker Jason Arakgi walked through the door.

“When they came in, they immediately started chatting with the residents and staff. As you can imagine, the residents ate this up!” said Rob. “Their presence was also a huge hit with the sons and grandsons of residents that came for the afternoon.”

Resident Jean Roe shared some laughs with Jason before the game. "Oh, that was great having the players from the BC Lions here. It was a lot of fun!" she said.

Another resident, Helen Fitzer, watched the game with her son Gordon. "This was excellent. His ring is huge!" she said. Gordon was also delighted by the special guests. "I can't believe you did this for the residents," he said.

Both players posed for photos, and even autographed the BC Lions shirt that Rob was wearing. After the event, Rob printed out the photos he had taken, and gave them to the residents that day. 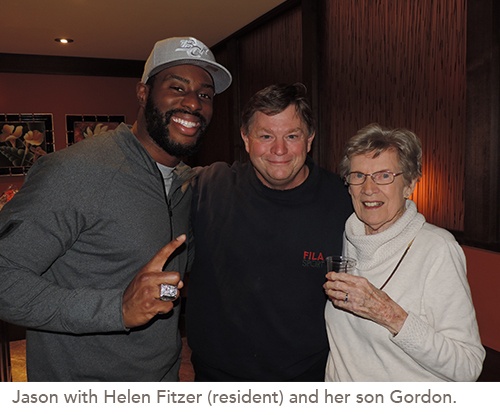 “They could have spent the day at any party, but chose to come and spend it with our residents. These young men are pillars of the community, and amazing ambassadors for the BC Lions and the CFL,” said Rob.

According to the two all-star players, the benefit was not entirely one-sided.

"Jason and I really enjoyed spending Super Bowl Sunday with the residents at Pacifica,” said Shawn. “It was a good opportunity to give them some insight from a player’s perspective, but also for us to learn from people with such life experience. I'd like to thank the staff and residents at Pacifica for such a great time."

Next Post
Getting seniors programming down to a fine art

Residents and team members at Lincoln Park took 10,787 steps, and raised $4,000, in support of the Alzheimer Society of Niagara. One step for each person living with dementia in the Niagara region.
In: Giving Back
END_OF_DOCUMENT_TOKEN_TO_BE_REPLACED

Pickle parties, carnivals, and impromptu kayaking trips are a regular occurrence for residents at Peninsula Retirement Residence. But how does that all come together? Meet Diane Toth, Queen of Fun.
In: Innovative Programs
END_OF_DOCUMENT_TOKEN_TO_BE_REPLACED