Staring up at the bottom of the ship, which floated 50 feet above him, Leading Seaman Bernie Heasler really wished he knew how to swim.

The Sailor Who Couldn’t Swim 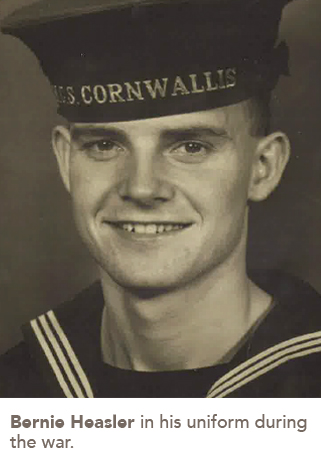 The waves coming over the bow of the ship would often be over 15-feet high. For someone who couldn’t swim well, it was not a welcome sight.

“When I first joined the Navy, I was on the bridge as a lookout,” said Bernie Heasler, Leading Seaman in the Canadian Navy. “One day I saw something cross in front of her bow, and I hollered back at the wheelhouse.”

The ship put in full a stern, avoiding a large submarine. Other times, Bernie can remember doing drills out in a rubber dinghy. Often they would row out so far from the ship that it would be out of eyesight, something Bernie found particularly terrifying.

“They took us out in all kinds of weather. I’ve seen a lot of the world in my time.”

Born in Kingston, ON, in 1931, Bernie joined the navy when he was only 20 years old. He had six siblings, all of which were boys but one. He left home at age 11, working on farms for free for three years while he completed his education. In 1951, the same year he joined the navy, both of his older brothers joined the Canadian army as well: one in the military, and one in the air force.

When Bernie joined the navy in 1951, both the Cold War and Korean War were in full swing. But some of the most dangerous moments for Bernie actually came at the hands of his shipmates.

“I've seen the bottom of the ship twice,” Bernie said. “The third time I knew I wouldn't come back up.”

They were on ship and anchored out in the ocean. It was a calm day, and the officers were encouraging everyone to go swimming. At first, Bernie refused, because he did not think he could swim more than 10 or 20 feet. But after some pressure he accepted, and joined the rest of the crew in the water.

As soon as he reached for the ropes to pull himself out of the water, someone put their foot on his head and forced him below the waves.

Bernie said he remembers sinking down to the bottom of the ocean, some 50 feet where they were anchored, and crawling along the bottom, beneath the ship, to the other side to come back up. No one would tell him who had pushed him under. Not long after, the exact same scenario repeated. Bernie never went swimming off the ship again.

“When you see that bottom of a ship, it is a big ship, that's kind of scary.”

Not long after this, Bernie and the other trainees were told that they had been at sea long enough to specialize. Bernie decided he wanted to be a cook, and took the cook’s course.

Bernie said he cooked a little bit of everything during his five years at sea. Often, friendly submarines would come up beside the ship at night and ask him for a hot meal. He travelled to many places during his time onboard ship, including England, Newfoundland, Norway, and Cuba. He spent so much time on the ocean, he nearly missed his own wedding.

“I was supposed to go to Korea on Friday, and I asked the spy officer if he could get somebody to take my place, because I was getting married the next day.”

The officer did find someone to take Bernie’s place, but Bernie still had to appear at the ship’s launch. If his replacement didn’t show, Bernie would have to set sail.

They waited over 20 minutes for the replacement before setting sail, with Bernie on the jetty. They got 14-feet out when somebody came sprinting down the dock — it was the substitute. They had to pull back into shore, but Bernie was able to make his wedding.

Bernie and Shirley met when he first joined the navy in Halifax. People first discovered they were together after they went up to Citadel Hill on an outing and someone snuck a picture of the group, featuring it in the next day’s newspaper. They were married on a Friday in 1953. Two days later, Bernie was stationed back on a ship and set sail, leaving Shirley to return to her parents.

“Her mother said, ‘that was a short marriage,’” Bernie said with a laugh. “But we made it almost 64 years married, and I think that was pretty good.”

After the war, Bernie worked at a company in Millhaven that made materials for the services. He worked in the control room. It was a job most of his superiors believed you would need a college-level degree to complete. Bernie, who was very good at his role despite his Grade 8 education, worked at the company for 36 years; starting from the bottom and working his way to the top.

Today, Bernie continues to enjoy life at Royale Place Retirement Residence in Kingston, ON. He’s well known for his skills building puzzles. In the two years he’s been at Royale, he’s completed over 41 puzzles, including a piece he has framed in his suite, which was 2,000 pieces. Recently, he was asked to complete two 1,000-piece puzzles by Royale Place, which intends to frame the completed works and hang them in their lounge for everyone to admire.

Next Post
Farm to Table: Only the freshest ingredients

The Kingsmere Spirit Squad put on a performance for residents to enjoy from their balconies.
In: Stories from our Team
END_OF_DOCUMENT_TOKEN_TO_BE_REPLACED

Thank you to all of the personal support workers for the amazing work they do every day.
In: Stories from our Team
END_OF_DOCUMENT_TOKEN_TO_BE_REPLACED

Thank you to all of the amazing nurses working with Sienna and across the globe for everything they do each day.
In: Stories from our Team
END_OF_DOCUMENT_TOKEN_TO_BE_REPLACED