Prayer beads blessed by the Pope, seven bullet wounds, and one doctor changed everything for this WWII veteran. 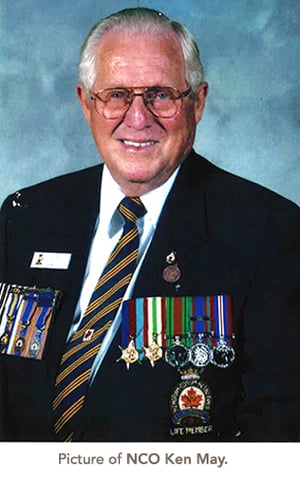 “The moonlight was almost romantic.”

December 20, 1944; North Italy. NCO Ken May waited patiently while the higher officers sorted the men into position for a midnight attack. Despite the time of year, the weather was warm. Ken was part of the Perth Regiment, in the Canadian Military. His brother, Don, was in the Irish Regiment. There was a third regiment on the field as well. During battle, the three regiments often worked side-by-side, leapfrogging over one another.

Ken stepped forward, accepting command of the 2 PIAT crews he had been assigned. Projector, Infantry, Anti-Tank (PIAT) crews were used to clear houses and attack enemy tanks. The 3-man crews had to get dangerously close to their targets to take them out. Usually, Ken’s crews were using 6lb guns.

The PIAT crews moved into formation behind the company, which consisted of mainly marching men. Ken had not really wanted to lead a PIAT crew on this night. His crews had another PIAT crew in front of them, putting them fairly far from the front. As they advanced, Ken noted that the moonlight was exceptionally bright, had he been anywhere else it would have felt almost romantic.

The bullet ripped through the muscles in Ken’s leg, and he hit the ground as quickly as he could.

“We walked right into an ambush,” Ken said. “The whole lead platoon were killed... It was just killed and wounded all the way back. They dissolved the whole company that night there, wasn't enough left to do anything with, that's how badly we got hit.”

Laying on the ground in a ditch with a few other men, Ken felt another bullet go through his right shoulder, another up his spine, and another in his left hip.

He was not yet too worried, as none of the bullets were near his heart. A few minutes later, his left hand went numb, and so he began to shake it, thinking he had it poorly positioned and would be able to restore circulation. When he looked down, his jacket was red with blood — two additional bullets had gone through his arm, shattering his radius.

In the next second, Ken froze as the wind whispered above his ear. A bullet went through the brim of his steel helmet, leaving a hole, but did not hit him.

Thankfully, artillery support arrived then. The 25lb guns landed a direct hit on the machinegun nest, which was manned by two young Nazis who had been left behind the larger force.

Through all this chaos, Ken’s brother, Don, tried to find him, even as he leapt over bodies on his way forwards to fight.

“This is what Don told me, you know, after we got home,” Ken said. “He said, ‘you just think they're down resting — that they got hit so fast they didn't even know what hit them.’”

The two brothers did not end up meeting on the battlefield; however, both survived.

Ken was born at home in East York, ON, in 1921. As a teenager, he began working for Weston’s Bread as a delivery man in Toronto.

“I started as a helper with this chap, and he was old; he had to be around 60 or 65. He was a good guy — had plenty ideas. He'd wear an overcoat in warm weather and he’d say ‘what keeps the cold out, keeps the heat out,’” Ken said with a laugh. “I could never understand that theory.”

By the time he was 17, Ken had his own bread wagon, which was unheard of at the time. Because of this, he wasn’t keen on joining the war, but a letter from the government, which explained how important his contribution would be, convinced him otherwise. He applied to join the air force in 1942; however, he was told both his eardrums were scarred, and so he was not eligible to join. He joined the army on September 14, 1942, at the age of 21, days before he was supposed to be married.

Once he was in the army, Ken needed their permission to get married. Unfortunately, he and Gertrude had to postpone their wedding and choose a wedding date that was pre-approved by the military. They were married on January 2, 1943.

After extensive training in Canada, Ken, his brother, and the rest of the brigade were shipped to England.

“I can just imagine how my parents felt when their two sons were going overseas,” Ken said. “We spent some time in England, and then were sent to Italy.”

They made their way into Northern Italy. Ken said the anti-tank guns, which he worked with, didn’t see much action. After some time, he was given leave and asked if he could go to Rome for it.

Before he left, one of the younger soldiers asked Ken if he would take a pair of prayer beads with him to have them blessed by the Pope. Ken agreed.

During his furlough, or leave, Ken stayed in the “Canadian Building,” which housed only Canadians and was very close to the Vatican. He toured the catacombs, the colosseum, and the Vatican — he did not forget his promise to his comrade.

“Meanwhile, I'm not a Catholic; I had no idea what to do,” Ken said. “I went up to the Vatican Church, knocked on the side door, and the Swiss Guard came to it. I think they were all about seven feet tall, but boy were they well dressed in their uniform. I told the one what I wanted, and he said, ‘Yes, no problem.’

“After spending a week in Rome, I went back. Of course and picked up the prayer beads for the chap,” Ken said. “However, when I got back he was killed. So I gave them to his friend, who said he would make sure his mother got them. That was during the middle of the day. A little later on they called us all together, and said we're going up on a midnight attack tonight. So I hadn’t had too much sleep, and now we're going up on a midnight attack.”

Their midnight attack on December 20, 1944, under an exceptionally bright moon, turned into the ambush.

Ken was shot seven times that night. When the shooting died down, he crawled out of the ditch he and some of the men had taken shelter in and began to crawl back towards the base. He attempted to help another soldier. Ken pulled the solider along, but the other soldier completely collapsed after several feet, and Ken could not move him. He had to go on alone.

After a while, Ken could not crawl any farther, so he walked, despite the greater risk of being shot.

“I was staggering pretty good, and a couple of guys saw me.”

They took Ken to the front advanced dressing station, which did not have doctors, but had medics. They began cutting Ken’s clothes off. When they saw his back, they said he was too wounded for them, that he would have to go to the closest temporary hospital.

He was loaded onto a carrier, which was like a mini tank. He can remember thinking that he made an easy target laying out in the open. He was then transferred to a better hold car, and continued to the hospital on the front line. He was only to stay the night before being transferred further back.

The hospital had once been an Italian military barracks, and so there were 50 people in one room, with rows on each side.

“At one point there was three doctors standing at the foot of my bed, and they're trying to decide whether they're going to cut my hand off or not.”

The two bullets that had gone through Ken’s forearm had shattered his radius, and they were concerned about the wound being infected. Dr. Ganshorn did not agree with his colleagues. Thanks to him, Ken kept his hand.

Ken stayed at that make-shift hospital for three weeks, under the careful eye of Dr. Ganshorn. The two chatted frequently during this time, telling tales of home. Ken regained almost full use of his right hand, which surprised Dr. Ganshorn immensely.

“He sat on the side of my bed and he says, ‘let me see you move those fingers.’ So I wiggled my fingers. He said, “My God, I don't know how you're doing it. There’s such a mess in there.”

Eventually, Ken was scheduled to be sent back to England on a hospital ship. The first ship took him from Rome, Italy, to a hospital on the Adriatic coast. There, he waited three days for another, faster, ship to take him to England. A Norweigen Luxury Liner, converted into a hospital ship, picked them up.

“Boy, could that thing move… you looked out the side of the boat at night, you're going through the water so fast it would make you dizzy. Of course at night, the ship is lit up like a hotel, the whole ship had lights on the sides with red crosses.”

Ken was scheduled to sail back to Canada when the war suddenly ended.

“VE Day, that was the day we were supposed to get on a ship to come home. Everything died. Everything stopped. Nothing happened. We saw more people on the street that I'd seen all the time I was in England. They were all celebrating, and I can understand why.”

Ken got on a ship headed home the next day. While standing on the stern of the ship, he began speaking with another soldier. By chance, they were both from East York, Ontario, and had lived only two blocks from one another. They were almost instantly best friends, and remained so throughout the years.

After the war, Ken returned to working in sales. He and Gertrude were happily married for almost 67 years, until Gertrude passed away. They have three daughters and one son. One of Ken’s children moved to Vancouver, BC. On one of his visits, some 50 years after the war had ended, Ken looked up doctors in the area. Dr. Ganshorn was still practising.

“I called him at home, and it didn't take too long talking to him before I convinced him that he was the doctor that saved my hand.”

Ganshorn had been promoted to Colonel before leaving the army and returning to civilian work. He and Ken decided to meet for coffee. When they met, Ganshorn brought the original medical record books he’d had in Italy when he treated Ken.

“He read to me exactly everything that was wrong with me and so we ended up having a really good conversation.”

Today, Ken is 98 years old. He recently finished writing his memoirs, and is awaiting their publication. He enjoys talking to people, and is well known for his friendliness at Kawartha Lakes Retirement Residence in Bobcaygeon, ON, where he lives.

“I have fun… I talk to more people in the dining room than anyone else!”

When Amanda was a child, spending the weekend with her Grampa Bill was something she always looked forward to. Thanks to the support of the team at Weston Terrace Care Community in Toronto, he was able to see her in her wedding dress.
In: Love Stories
END_OF_DOCUMENT_TOKEN_TO_BE_REPLACED

Each month, we take a moment to recognize some of the outstanding team members who work with us. Thank you all for the work you do each day.
In: Stories from our Team
END_OF_DOCUMENT_TOKEN_TO_BE_REPLACED

Fairwinds Lodge Retirement Residence paid tribute to the previous generation of nurses — the residents who now live with them.
In: Innovative Programs
END_OF_DOCUMENT_TOKEN_TO_BE_REPLACED