Bloomington Cove held their first resident art show, and reminding residents that their life is full of possibilities.

Uncovering memories one brush stroke at a time

Sometimes the shades swirl, forming a colour-sucking vortex in the sky, other times a shoe is turned into a work of art, or sticks become the makings of a centrepiece. Anything the mind can imagine, these blooming artists are encouraged to explore.

“I knew the residents had talent, and that Sarah, our art therapist, could make anyone an artist, but I was truly surprised by the high quality of work that was completed,” said Katelyn Carter, director of resident programs and admissions at Bloomington Cove Care Community in Stouffville. 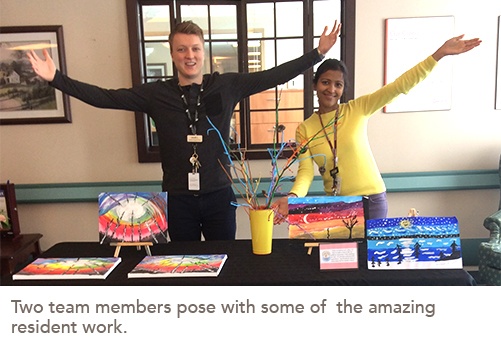 Recently, Bloomington Cove hosted an art show, displaying all of the artwork residents completed in art therapy. The show was open to team members, residents and family, with viewers being able to purchase artwork by donation. All donations went to the residents’ council, who are planning a summer event.

“It will be something special that the residents want,” Katelyn said, adding she suspects they may choose to have an ice cream truck or some entertainment.

Bloomington Cove is a special care community, being the only licenced long-term care community in Ontario devoted exclusively to residents with dementia. This makes art therapy a particularly central fixture for them, and the residents, and especially the ones who continually go to art therapy, were ecstatic to see their artwork on display.

Over 30 people attended the art show, which was held on the main floor. Four painting-covered tables were set-up in the front lobby; each one had place cards describing the theme of the art and resident quotes. There were also painted rocks lining the way to the multipurpose room. Overall, more than 50 pieces of art were on display.

Families thoroughly enjoyed the show, according to Katelyn, who said they continually pointed out pieces of art that were particularly inspiring.

“I think it was a really special afternoon for them to see the abilities of their loved one, and be able to take it away in the form of a tangible piece of art,” she said. 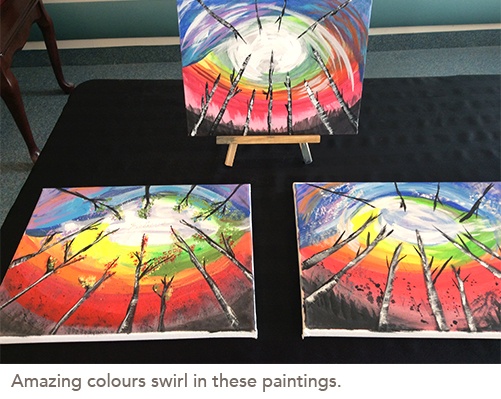 Art therapy is really important because it gives residents “an opportunity to have an outlet, to show who they are and what their thinking progresses are, and that they’re talented and able to do things,” Katelyn said.

Sarah, the art therapist, has been going to Bloomington Cove for several years. She runs group-session art classes. Katelyn says she often sits with the residents while they paint, engaging them in conversations about their art. At the end of sessions, everyone shows their art to the group and speaks about why they chose certain colours or patterns. It is a program that many residents enjoy.

“Sometimes during the sessions a couple residents will just start singing and then the whole group starts singing,” Katelyn said. “It’s about talking and sharing and putting it all in a creative aspect, which is good.”

Next Post
Fashion on Fire at Fox Ridge Care Community

Each month, we’re pausing to recognize some of the outstanding team members who work with us. Thank you for the work you do each day. You are all truly heroes.
In: Stories from our Team
END_OF_DOCUMENT_TOKEN_TO_BE_REPLACED

Residents and team members at Rosewood Retirement Residence in Kingston, ON enjoyed a sushi demonstration by Brandon Gray, a PSW student who learned to make sushi while traveling with a professional chef in Japan.
In: Stories from our Team
END_OF_DOCUMENT_TOKEN_TO_BE_REPLACED