After 30 years off the ice, Ivy joined friends from Lincoln Park on a trip back to her old curling club.

After 30 years off the ice, Ivy returned to her old club 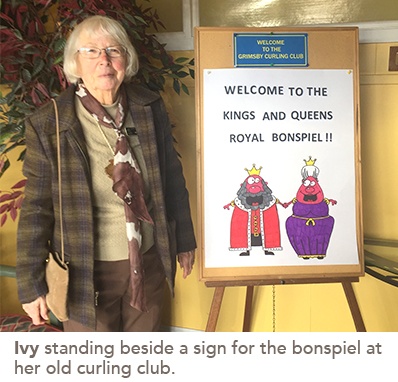 In 1983, Ivy Slater joined her local curling club on an exchange to Scotland, where the sport was invented 500 years before. She says it is the highlight of her curling experience, which saw her in the club four times a week for 30 years.

She wasn’t a professional, but it was a game she deeply enjoyed playing, and still enjoys watching. It’s been 30 years since she was on the ice, but recently she was invited back to her curling club.

“Almost everyone remembered her there,” said Jessica Andrusko, retirement councilor at Lincoln Park Retirement Residence in Grimsby. “Ivy was very excited, and even fished out her old curling pin to wear to the club.”

Lincoln Park sponsored a bonspiel, or tournament, at the Grimsby Curling Club and went to watch the games. Ivy was one of many residents invited, and she was happy to explain the game to those who were less familiar with it.

Ivy first got into curling after a neighbor introduced her to the sport. She and her husband had just moved to Grimsby, and she took to the sport immediately.

“Curling is the only sport I’ve really been involved with, the only one I would sit down and watch,” Ivy said. She often recommends curling, and her old club, to friends. “Every club is looking for new members.”

Her trip to Scotland came after her own club invited a Scottish team for a game. The Grimsby Curling Club was invited to Scotland in return, and toured the country for two weeks.

“It was a marvellous entertainment!” Ivy said. “We curled everywhere we were!”

Ivy played in many bonspiels over the years, raising two daughters at the same time. When her husband retired from his job, the two spent their winters in the Gulf of Mexico, where it’s a little too hot to curl, but Ivy still remembers her curling days fondly.

“They were all very friendly and helpful,” Ivy said of the people from her curling club.

Going back to see her old curling club after so long was exciting for Ivy, who later described it as “the highlight of [her] weekend.”

Next Post
The key to happiness? Love your job.

A Master Warrant Officer in the Royal Canadian Air Force, Eugene’s true passion is for music.
In: Inspirational Life
END_OF_DOCUMENT_TOKEN_TO_BE_REPLACED

“The love in this building has no comparison,” Denise Kavin said about Cheltenham CareCommunity, where she lives. Denise has lived on 3 continents, and extends her compassion to everyoneshe meets.
In: Inspirational Life
END_OF_DOCUMENT_TOKEN_TO_BE_REPLACED

A brain-tumour survivor, Michelle’s outstanding spirit has made her a valuable part of the teamat Fairwinds Lodge.
In: Stories from our Team
END_OF_DOCUMENT_TOKEN_TO_BE_REPLACED