For Pierre and Veronique, one wedding just wasn’t enough. Follow them as they voyage across poverty-stricken post WWII Europe in search of greener pastures.

Three weddings and a food basket 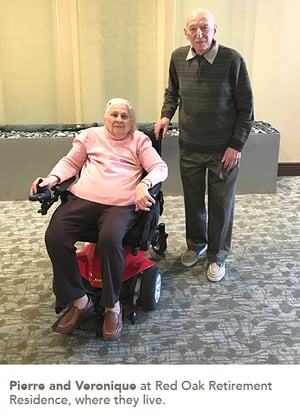 Pierre, who is 98, and Veronique, who is 94, sit together, their fingers entwined. They’ve been married for 75 years, but they’re more in love now than ever before.

Both born in Budapest, Hungary, they’ve known each other almost all their lives. Their families were neighbours and close friends. Unfortunately, Pierre lost both of his parents during the holocaust, leaving him very much alone — except for Veronique’s family.

“There was no food,” Pierre said, explaining that post WWII Budapest saw many hardships. “Veronique’s parents were helping me and feeding me.”

But without any family of his own, Pierre was quite lonely. Perhaps thinking they would be a good match, one of Veronique’s older sisters suggested that Pierre ask Veronique out, which he did. Not long after, Pierre asked Veronique’s father for his permission to get married. Her father, Pierre said, was quite happy with the match.

There was only one problem. In 1944’s Budapest, couples required parental permission to get married. And while Veronique’s father was happy to welcome Pierre into the family, Pierre didn’t have parents to sign for him.

“I didn't know what to do,” Pierre said. “So I just walked on the street and there was a sign for a lawyer.”

Pierre explained his predicament to the lawyer, who offered to adopt Pierre. “So that took about 15 minutes for him to adopt me, and he gave me the agreement I needed,” Pierre said. “At that time it didn't take very much, just sign a paper. Lawyers were quite powerful.”

Pierre and Veronique were married at city hall. It was a quick, non-religious event. Later, when they told Veronique’s family, her father insisted that they needed a religious wedding in a church. Their second wedding took an additional 6 weeks to arrange.

The two were very happy together; however, things in Budapest were not improving. According to Pierre, the Soviets were invading the country; only a year after their wedding, the couple decided they had to leave. Pierre had family in France, and so they decided to make the over 1,600 km journey together.

Their first stop was in Vienna, Austria, which is close to the Hungary boarder. Like Budapest, the community was suffering from a food shortage. However, the couple discovered that newlyweds were given food parcels on top of their rations.

The country didn’t have records of their previous marriages, and so all it took was a brief ceremony in a minister’s office. When the food parcel was delivered, Pierre and Veronique were extremely grateful.

They stayed in Vienna for a few months before making their way to France, a journey that took three months, arriving in 1946. Unfortunately, the conditions in France were the same as they were in all of Europe, and the business owned by Pierre’s family was struggling.

After spending five years in France, hoping things would improve, the entire family began to look across the Atlantic to Canada, where things were more prosperous. Pierre and Veronique offered to make the journey first, to figure out the process for immigration and see how things in Canada were before the rest of the family followed.

There was a huge line outside of the embassy the day they went. Pierre said he can remember a man going up and down the line, asking people if they had a trade. At the time, Pierre was on his way to becoming an engineer, and so the couple were pulled ahead.

They settled into Canada well, with Pierre even finishing his schooling at McGill University in Montreal, Quebec. When they reconnected with Pierre’s family in France, to say it would be a good time for them to come over, the family business had picked up and they were no longer looking to move.

Pierre, meanwhile, was a supervisor at his company, and the couple was well settled. Despite not having any family in Canada, Pierre and Veronique made it their home.

Today, they continue to enjoy life at Red Oak Retirement Residence in Kanata, ON, where they live.

“Our favourite things to do are listen to Classical music and hold hands,” Pierre said.

The Kingsmere Spirit Squad put on a performance for residents to enjoy from their balconies.
In: Stories from our Team
END_OF_DOCUMENT_TOKEN_TO_BE_REPLACED

Thank you to all of the personal support workers for the amazing work they do every day.
In: Stories from our Team
END_OF_DOCUMENT_TOKEN_TO_BE_REPLACED

Thank you to all of the amazing nurses working with Sienna and across the globe for everything they do each day.
In: Stories from our Team
END_OF_DOCUMENT_TOKEN_TO_BE_REPLACED